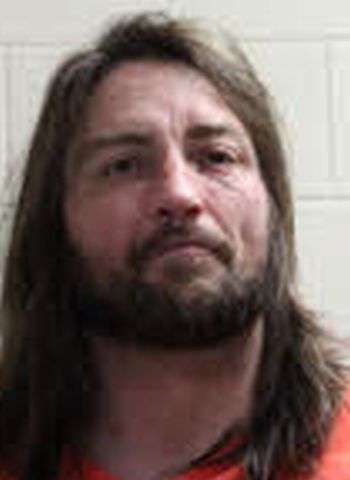 43-year-old Ronnie K. Hicks has been arrested by authorities in Watauga County following a low-speed pursuit involving a tractor. He was charged with felony counts of fleeing to elude arrest and assault with a deadly weapon on a government official, along with misdemeanor counts of driving while impaired, resisting a public officer, and reckless driving. He was also cited for driving left of center.

At about 9:25 a.m. yesterday (January 17), Watauga County 9-1-1 took a call regarding a man driving a John Deere tractor and attempting to strike pedestrians and vehicles in the vicinity of the 1,600 block of U.S. Highway 421 South in Boone. Several other calls were received in rapid succession reporting vehicles that had been struck by the tractor.

Boone Police and Watauga County Sheriff’s Deputies responded to the area. Boone Police located the tractor, driven by Ronnie Hicks, in the parking lot at Three Forks Baptist Church. Hicks had pushed a dumpster into the building just before Officers arrived. Officers attempted to stop the driver, but he refused and began driving back onto Highway 421, heading toward Wilkes County. The North Carolina State Highway Patrol joined in the low-speed pursuit on Highway 421, Old 421, and Elk Creek Road as other Officers worked to divert oncoming traffic.

Speeds during the pursuit were in the 20 M.P.H. range; however, Hicks drove erratically and intentionally veered towards motorists and pursuing Officers. At least three civilian vehicles were damaged and one Boone Police patrol unit was intentionally rammed, resulting in several thousand dollars in damages. A safety bar on the front of the vehicle likely spared the Officer from injury.

Stop sticks were deployed to flatten the tractor’s tires. Both front tires deflated and one tire completely separated from the rim. The rear tires did not deflate. Hicks continued along Old 421 toward Parkway School. Concern for the safety of students and others resulted in a decision to use a rifle to deflate the rear tires, which was done successfully.

On the 4,700 block of Elk Creek Road, Hicks turned onto a private drive. After traveling a short distance, Hicks abandoned the tractor and fled on foot while brandishing a knife. Officers issued verbal commands and deployed a Taser.

Following his arrest, Hicks was jailed under a $50,000 secured bond. An appearance in Watauga District Court was set for March 10. The tractor driven by Hicks was determined to be stolen. Additional charges for the theft and more are forthcoming.

No injuries were reported. Boone Police Chief Chief Andy Le Beau expressed his appreciation to the Watauga County Sheriff’s Office and the Highway Patrol for their assistance.