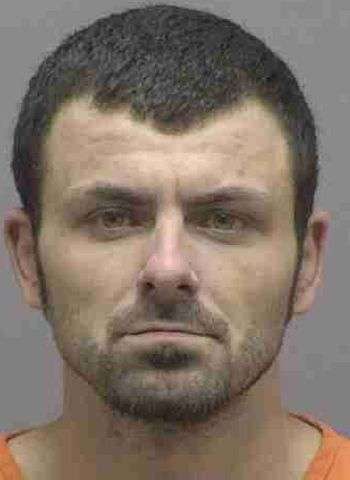 Events leading to Carpenter’s arrest began on September 9 when an Officer on Buffalo Shoals Road saw a burgundy motorcycle that matched the description of a bike that had been reported stolen by Maiden Police.

The motorcycle pulled into a driveway on the 1,900 block of Buffalo Shoals Road. After speaking to the driver and a resident at that address, the Officer asked the driver if he could check the VIN number to be sure the motorcycle wasn’t stolen. As the Officer checked the number, the driver fled on foot into a nearby wooded area. The driver was identified as Joshua Thomas Carpenter. Deputies searched the area, but were unable to find Carpenter. The stolen motorcycle was picked up by Maiden Police.

Later on the same date, a Deputy responded to reports of a suspicious person in the area of Buffalo Shoals Road and Daniel Shrum Road. The Deputy encountered Carpenter near the Shiloh Run subdivision. The Officer exited her vehicle and began a foot chase that went approximately 420 feet down Bridle Trail. She saw Carpenter as he went behind a boat parked at a residence. A local resident assisted in taking the suspect into custody.

Carpenter was placed in the Harven A. Crouse Detention Center under a $17,000 secured bond. He’ll appear in District Court on September 30.

A fatal shooting over the weekend in Hickory is under investigation. On Friday (July 23)…