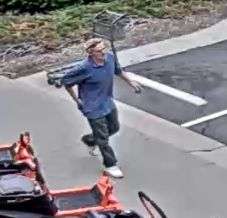 suspect in theft of generator from Tractor Supply
all photos courtesy of Lincoln Co. Sheriff's Office

Lincoln County Sheriff’s detectives are investigating the theft of a generator Sunday from Tractor Supply on Gilman Road in Denver, N.C.

Deputies were dispatched shortly before 5 p.m. Sunday (May 15) after an employee reported that a white male had loaded the generator on a shopping cart and exited the store without paying. The generator was a Champion brand 10,000-watt model valued at about $1,100.

Detectives believe two people were involved in the theft. The suspect loaded the stolen generator into a waiting older model Buick Century that had backed up near the front of the store. The suspect is estimated to be in his mid-to-late 50s. He was wearing a blue shirt and blue jeans. A second suspect was described as a black male in his 60s wearing a black shirt and blue jeans. The men drove away in an undetermined direction.