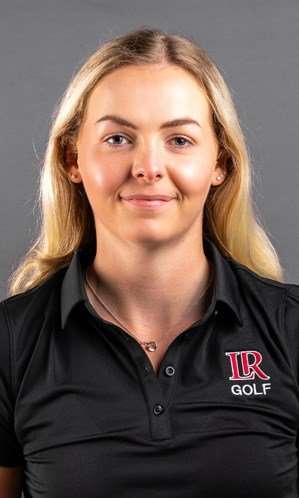 Megan Robb was as high as 11th on the individual leaderboard before the final round.
photo courtesy of Lenoir-Rhyne Athletics

The regional was hosted at the Grande Oaks Golf Club in Davie, Fla. which is a 5,887 yard par 71 course. Robb shot rounds of 76 and 74 to sit in an 11th place tie heading into the final day but Robb had a tough final round to drop to 49th place. Robb shot an 82 in the third round and managed to par just 11 holes on the day with no birdies. After paring the first hole of the day, Robb shot a bogey on hole two and then a triple bogey on the third hole. Robb carded a +7 on the front seven but rebounded, posting six pars and a +4 on the back nine. However, that result dropped her out of qualifying for next week’s NCAA Division II Championship in Gainesville, Ga.

Robb finished in 49th-place out of 66 golfers who qualified for the regional.