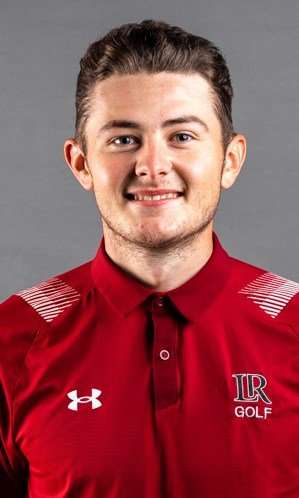 The South Atlantic Conference Scholar-Athlete of the Year award is presented annually to one student-athlete in each of the Conference’s championship sports, and is voted on by the SAC’s Faculty Athletic Representatives Committee. The winners are selected based on their achievements in academics, athletics, service, and leadership.

Raybould, a senior from Bridlington, England, boasts a 3.86 GPA majoring in finance and accounting. He has been named to the Lenoir-Rhyne President’s and Dean’s Lists four times, is a three-time SAC Commissioner’s Honor Roll selection, and he is a member of the Alpha Lambda Delta Honor Society.

“Lenoir-Rhyne golf is very excited that Matty has been chosen as the 2022 SAC Men’s Golf Scholar-Athlete of the Year,” said Lenoir-Rhyne head men’s golf coach Elliot Gealy. “It is a very prestigious award and Matty is a deserving winner. He has been a great ambassador for Lenoir-Rhyne in the classroom as well as on the course and we look forward to Matty completing his master’s degree next year and competing for the Bears’ in his final season.”

A third team All-SAC selection in 2021-22, Raybould posted a 72.5 scoring average with two top-five finishes and three top-25 finishes this season. He was named the SAC Freshman of the Year in 2018-19 and was an honorable mention All-Conference selection.

In addition to his prowess in the classroom and on the golf course, Raybould has been an active member of the Lenoir-Rhyne campus as a member of the Student-Athlete Advisory Committee and the Bears Leadership Academy. He also volunteers for 828 Day, Trunk or Treat, and as a basketball concessions worker.