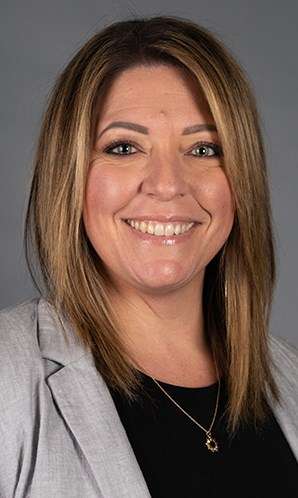 Monica Gordy Polizzi has been with Lenoir-Rhyne since February of this year.
photo courtesy of Lenoir-Rhyne Athletics

“Serving on the national football committee for the past few years has been one of the most rewarding experiences of my professional career so far,” said Polizzi. “I have been so fortunate to work alongside of, and learn from, incredible coaches, administrators, and NCAA staff during my tenure on the football committee. Our goal is to ensure all Division II football student-athletes get an exceptional championship experience, and I look forward to leading those efforts this year along with my committee colleagues.”

In her role as the Chair, Polizzi works hand-and-hand with the NCAA on putting on the 2022 Division II National Football Championship in McKinney, Texas. She will work with the committee on weekly regional rankings, run weekly Regional Advisory Committee calls and bring that information on to the National Committee as well as assist with the bracketing of the 2022 DII Playoffs. Polizzi will coordinate with McKinney ISD Stadium on game logistics as well as work with ESPN on broadcast needs for the game. She will be a site rep for playoff games and will help manage the entire national playoff field as opposed to helping coordinate the Super Region 2 bracket as she had in years past.

Polizzi’s appointment to the National Committee started in 2019, the first of a four-year appointment. She was nominated by her peers to serve on the committee and served as the co-chair of Super Region 2 for the past three years.

“I want to congratulate Monica on being named chair of the DII National Football Committee,” said Kim Pate, Vice President for Athletics. “This is a huge honor and is so well deserved. It is significant and important to celebrate the naming of the first female, minority, or any underrepresented group in leadership roles and we are incredibly proud to have LR represented on a national stage by the first female chair. Monica will do an outstanding job in this role and has truly garnered tremendous respect from her committee colleagues due to her hard work, collaborative leadership style, and commitment and passion to serve and provide our DII Football student-athletes a top-notch Championship experience.”

Polizzi becomes one of three people in the South Atlantic Conference to ever serve on this committee. She joins Mars Hill Head Coach Tim Clifton and Wingate Head Coach Joe Reich.

“On behalf of the entire South Atlantic Conference, I would like to congratulate Monica on being selected as the chair of the DII National Football Committee,” said SAC Commissioner Patrick Britz. “This is a tremendous honor for her and being the first female to serve in this role is historic. The SAC has strived to promote the advancement of female coaches and administrators and this appointment emphasizes that. Monica has been a solid leader in the SAC as a coach and administrator at Mars Hill and Lenoir-Rhyne for several years and I have no doubt she will do a great job as the chair of this national committee.”