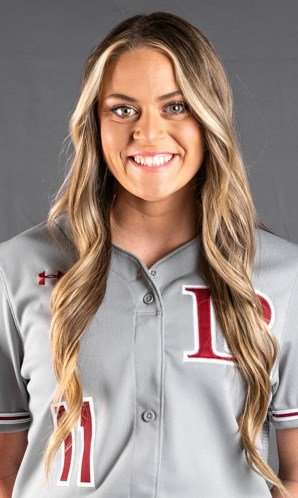 Savannah Moorefield also was named the 2022 South Atlantic Conference Softball Scholar-Athlete of the Year, the first softball player from L-R to win that award since 2000.
photo courtesy of Lenoir-Rhyne Athletics

Lenoir-Rhyne’s Savannah Moorefield has been named a Third-Team Academic All-American by the College Sports Information Directors of America (CoSIDA). Moorefied carried a 3.90 GPA in her undergraduate major of Exercise Science, and a 3.92 GPA in her graduate degree in Public Health. Moorefield was one of two softball athletes in the South Atlantic Conference to be named an Academic All-American.

Moorefield was also named the SAC Scholar-Athlete of the Year in softball, and on the softball diamond, she was National Fastpitch Coaches Association All-Region after hitting .397 and leading the Bears to a hosting seed in the NCAA Regional.