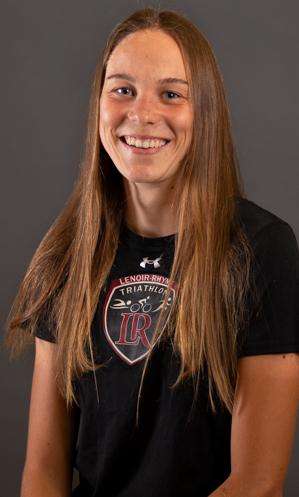 Eliska Rihova was named the National Freshman of the Year.
photo courtesy of Lenoir-Rhyne Athletics

It was a banner day for Lenoir-Rhyne Women’s Triathlon who captured the first women’s national championship in university history at the USTA Nationals. Lenoir-Rhyne’s team score of 268 captured the Division II National Title ahead of Colorado Mesa (252) and Wingate (246).

With the victory, head coach Harley Mason was named the National Coach of the Year in her first season at the helm. Additionally, Eliska Rihova brought home National Freshman of the Year honors thanks to her finish.

The Bears depth was on display as they took home 4th, 5th, 6th and 9th place individually. Rihova, who also earned regional Freshman of the Year honors earlier this season, paced Lenoir-Rhyne once again with her fourth-place finish. Rihova’s time of 1:07:26.4 included 10:15.7 in swimming, 36:05.5 on the bike and 19:32.4 on the run.

Sabrina Fleig was second for LR and fifth overall, finishing just 12 seconds after Rihova. Claudia Teran-Romagosa was sixth overall with a time of 1:08:08.07 and Nanette Nikolajsen was ninth overall and fourth on LR at 1:08:33.9.

Teresa Vesely and Chloe Telian rounded out the top finishers for the Bears along with Sayti Plank.

In their first season as a program in 2021, LR placed third at Nationals.