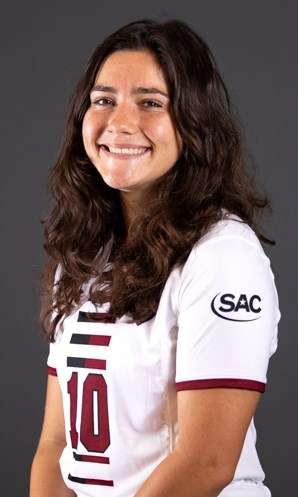 Neve Duston scored the lone goal of the contest for the Bears in the first half.
photo courtesy of Lenoir-Rhyne Athletics

The Lenoir-Rhyne Women’s Soccer Team got a first half goal from Neve Duston but the Trojans tied it later in the half as the two teams played to a 1-1 tie on Wednesday evening in SAC play. Anderson’s goal was the first goal the Bears have given up in a SAC game after posting three straight clean sheets to open up conference play.

LR started off with four corner kicks in the game’s first eleven minutes and capitalized on the fourth one as Evan O’Leary found Duston open in the box. Duston kicked it inside the right post for the game’s first goal.

LR out shot the Trojans 11-1 in the first half but Anderson used that lone shot to net the equalizer as Bethany Anderson drilled the ball from outside the box to tie it at one.

The Bears dominated the second half, out shooting the Trojans 13-2 and having three more corner kicks in the second half but the Bears could not find the game-winning goal. LR held the Trojans to just three shots on the day as S.A. Phillips did not have a save in goal for the Bears in the contest.

The Bears move to 7-1-2 against Anderson all-time at home. The Bears only home loss to Anderson was on September 8th, 1996 in the programs first ever meeting.

This was the Bears second tie this year after five ties in last years final four season.

Lenoir-Rhyne is 3-2-2 overall, 3-0-1 in the South Atlantic Conference. The Bears will travel to Mars Hill for a 1:00 PM match against the Lions on Saturday.