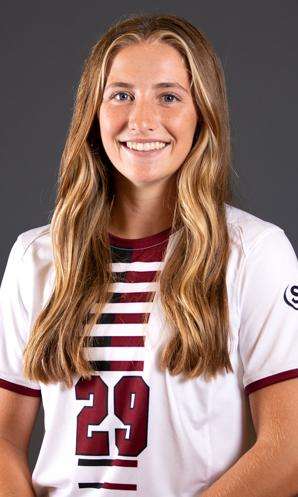 Kara Gavaghan scored the lone goal for the Bears in the first half.
photo courtesy of Lenoir-Rhyne Athletics

The Lenoir-Rhyne Women’s Soccer Team got a first half goal from Kara Gavaghan but UNC Pembroke got two second half goals from Mercy Bell to come from behind and defeat the Bears 2-1 in a key regional matchup. Both teams are coming off NCAA Tournament appearances last season.

LR got on the board in the 32nd minute after a corner kick. The Braves attempt to clear the ball but it ended up with Gavaghan getting the ball in the box who then beat the keeper to the far post to give the Bears the 1-0 lead. S.A. Phillips made five of her six saves in the first half and kept the Braves off the scoreboard in the first 45 minutes.

However, Bell scored twice in the second half. Bell found the equalizer in the 56th minute after a long pass from Ashleigh Harris. Bell than got the game-winner off her own rebound after a save by Phillips that Bell just tapped in to give the Braves the 2-1 lead.

The Bears had one last chance to tie it with a minute left but Ria Acton’s free kick was saved by Chiara Coppin. The save was Coppin’s fourth of the night. The game was even as the Braves just outshot the Bears 14-13 but the Bears had a 7-6 advantage on corner’s kicks.

LR had victories over the Braves in 2019 and 2021 but UNC-Pembroke snapped the Bears two game winning streak. Bell’s first goal was the first goal the Bears gave up in 230 minutes of action, dating back to the second game of the year.

The goal was Gavaghan’s 10th career goal for the junior. Gavaghan scored five goals last year and four her freshman season. Phillips’ six saves is a career-high as a Bear. Phillips made four stops last Saturday against Tusculum.

Lenoir-Rhyne is 2-2-1 overall. The Bears will return to SAC play with a home date with Limestone on Saturday at 5:00 PM.