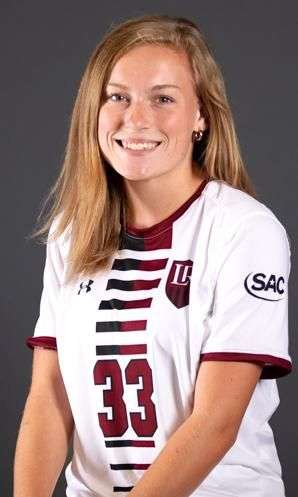 For the second straight year, the Lenoir-Rhyne Women’s Soccer team lost in overtime in the SAC semifinals. After an early Limestone goal, Evan O’Leary tied the game for the Bears in the 77th minute, but the Saints than scored in the first overtime period to advance to the SAC Championship game, 2-1. The Bears will now prepare for the NCAA Tournament, which starts on Friday.

Limestone jumped ahead in the 11th minute after a cross from Andrea Zwinkels that was played by Tabea Schutt, who beat S.A Phillips to the far post. It was the first time the Bears trailed in a game since October 1, a span of seven games.

After dominating the possession and chances, the Bears finally found the equalizer in the 77th minute. Nicole Auger was driving the end line when she sent a cross to the middle where O’Leary used her right foot to send it off the goalkeeper’s hands and into the back of the net. Schutt had the chance to give the Saints the win with a point-blank shot, but Phillips made a great save to keep it tied at 1-1.

Phillips then made two unbelievable saves in the first five minutes of overtime but after the second save the Saints broke through. Off a corner kick, Zwinkels chipped it in from just outside the box tor the game-winner. Bears had their chances as they out-shot the Saints 27-11 and had eight corner kicks on the evening, but the Saints defense held their own and led them to their first SAC Championship game.

The game was the 5th overtime postseason game for the Bears in the last two years, including last year’s SAC Semifinals. This game showcased the new rule this year for postseason play. All overtime periods are two ten minute halves, and the golden goal has been eliminated. This is the second straight season these two teams have met in the SAC tournament. The Bears defeated the Saints 2-0 in last year quarterfinals in Hickory. This is the fifth straight year the Bears have reached the SAC semifinals, but the team is just 1-4 in those games.

Elin Hansson, SAC Freshman and Offensive Player of the Year, missed her first game of the year with an injury.

Lenoir-Rhyne is 11-3-3 on the season. The Bears will now turn their attention to the NCAA Tournament as LR will learn their seeding and location on Sunday night. The first round starts on Friday, November 11th.