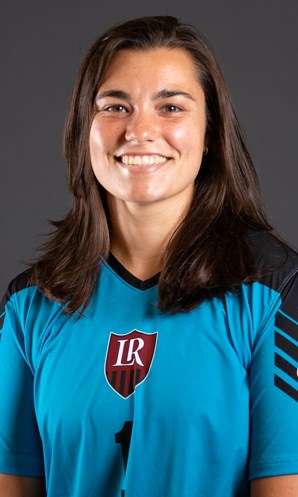 S.A. Phillips picked up her first win of the season with a clean sheet.
photo courtesy of Lenoir-Rhyne Athletics

The Lenoir-Rhyne Women’s Soccer team opened SAC play on Wednesday afternoon with a 1-0 win at Lincoln Memorial. The Bears got a goal from Abbie Biddle in the 50th minute and three saves from S.A. Phillips in goal to come away with their first victory of the season. The win is Head Coach Dean Ward’s first on the sidelines here at LR.

The first 45 minutes was a defensive battle as the teams combined for just seven total shots. The Bears had six of the seven shots, but only two were on target. Lenoir-Rhyne’s defense held the Railsplitters without a shot until the 40th minute when Phillips stopped a Meral Houweling shot to record her first save of the game. The teams headed to the intermission tied at zero.

Biddle got the Bears on the board just five minutes into the second half when she found the back of the net to give the Bears the 1-0 lead. The goal ended up being the only goal in the game and Biddle’s first game-winning goal in her career.

Phillips got her first clean sheet in a Bears uniform, making three saves on the afternoon.

LR tripled the shots of Lincoln Memorial, holding a 15-5 advantage. Stephanie Figueiredo had six shots in her 74 minutes of action. 19 different Bears saw action today with only Louise Berg and Carola Busquets playing the whole 90 minutes outside of Phillips.

The win was Head Coach Dean Ward’s first career victory as a Bear. Bears are now 3-0-1 in their last four SAC openers. LR snaps a two-game losing streak in Harrogate. LR’s last win here was in 2017. This was Lenoir-Rhyne’s first shutout of the year after having nine last year.

Biddle scored the game’s only goal about 90 minutes from her hometown in Seymour, Tenn. It was her third career goal.

LR is 1-1-1 overall, 1-0 in the South Atlantic Conference. The Bears will head back to Tennessee on Saturday for another SAC matchup, this time facing Tusculum. Kick-off is schedule for 5:00 PM.