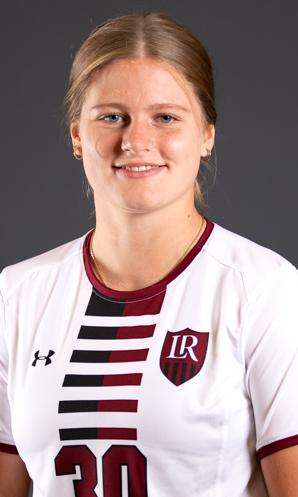 The Lenoir-Rhyne Women’s Soccer team scored five first half goals in a 7-0 win over Emory & Henry on Wednesday. Leonie Proessl scored her first two goals of the season and Elin Hansson scored a goal and added two assists while Anna Bates scored her first career goal as the Bears remained unbeaten in SAC play.

Hansson got the Bears on the board in the 19th minute with her fifth goal of the year after a cross from Evan O’Leary. The duo of Ria Acton and Kate Casey connected for the third time this year as Acton set up Casey for the second goal of the game just two minutes later.

A trio of Bears scored their first goal of the season to end the half as Stephanie Figueiredo, Proessl and Bates connected to find the back of the net and gave the Bears the 5-0 lead after 45 minutes.

This is the first ever meeting against Emory & Henry, who joined the SAC this past July. LR jumped idle Catawba to move into second place with 17 points, one point less than SAC leader Carson-Newman. The Eagles head to Hickory for a clash on Saturday with 18 points at the top of the standings. LR’s last two home games this year are against Carson-Newman and Catawba.

Hansson finished with five points on the contest, adding two assists to her goal Bates’ goal was her first career goal for the junior from King, N.C.

The seven goals are the most in a game since the Bears scored six against Francis Marion on September 15th 2021.

Lenoir-Rhyne improves to 6-2-3 overall, 5-0-2 in the South Atlantic Conference. The Bears will host first place Carson-Newman on Saturday at 5:00 PM.