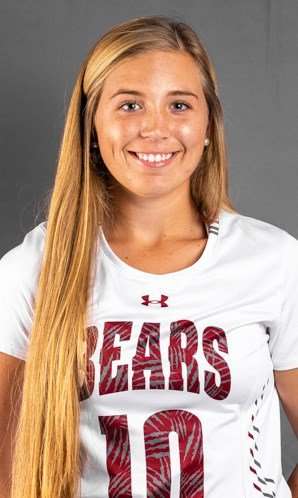 For the second straight season, the Lenoir-Rhyne Women’s Lacrosse Team fell in overtime in the South Atlantic Conference Tournament Quarterfinals. The Bears played the longest game in program history, falling to Lincoln Memorial in triple overtime at Moretz Stadium, 12-11.

Just like the first time these two teams played 10 days ago, Lincoln Memorial scored first but the Bears answered with an extended scoring run. LR scored four straight as Kaitlyn Lehman netted the first and Suzy Smith had three in a row to put the Bears up 4-1.

Avery Van Der Ziel answered with back-to-back scores to pull the Railsplitters within one at 4-3 with the second goal coming with just four seconds left in the opening quarter. Smith started the scoring in the second quarter and Cambrie Cochran added her sixth goal of the year as LR took a 7-4 lead.

LMU would draw within one goal two times in the third quarter but LR extended the lead to 11-8 on Smith’s seventh goal of the game with 9:48 to play in the fourth quarter. However, LMU would end regulation on a 3-0 run and tied the game up with 3:14 to play on a man-up goal from Sydnee Saksa.

Each goalie made standout saves in the fourth quarter and into overtime with Teanna Sieben especially coming up big with three stops in overtime. The Bears were a player down due to a yellow card in the second overtime but a Sieben save kept the game going.

As the game went into a third overtime, LMU finally broke the scoring drought when Chandler Bell beat Sieben to send LMU on to the semifinals. Smith finished with nine points on seven goals and two assists and Jolan Morey had a goal and four assists for LR.

LMU dominated the draw, winning 20 of 28 draw controls on the game led by seven from Samantha Billingsley, six from Ryba and five from Avery Van Der Ziel. Keegan Gillman came off the bench to make nine saves and earn the win.

This was the first-ever win for LMU over Lenoir-Rhyne in series history. The Bears had been 7-0 against the Railsplitters. The Bears played a double overtime game against Mount Olive in 2018 which was the longest game in program history before this contest. LR fell to UVA Wise in overtime in the Quarterfinal round of 2021.

Smith tied a career-high with those seven goals and sits just five away from 100 goals for her career. Dunnam finished the campaign with a program-record 47 caused turnovers.

LMU goes on to play #1 Queens on Friday. Both SAC Quarterfinal games went to overtime as Newberry upset Limestone in OT.

After Saturday's victory clinched the series for App State (19-14, 7-5 Sun Belt), the Mountaineers…