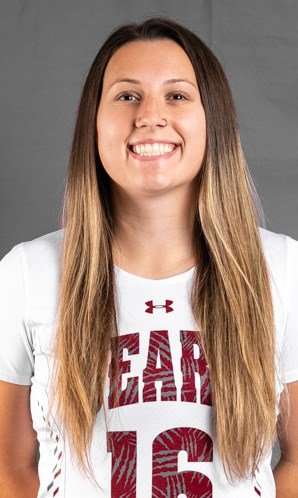 The Lenoir-Rhyne women’s lacrosse team celebrated Senior Day and held off a late rally from visiting Lincoln Memorial to send the seniors off with a 16-13 victory. Prior to the game, LR celebrated the careers of Carley Camp, Hannah Jones, Isabelle Dunnam, Liz Black, Kaitlyn Lehman and Cassie Lafler.

After LMU got the first score of the game, Lenoir-Rhyne put together a 7-0 scoring run to take control. Jolan Morey scored three times in the seven goal spurt and added an assist and Suzy Smith notched a goal and a pair of helpers.

LR led 8-2 after Smith’s 35 goal of the season but LMU pulled within four with back-to-back tallies. Lehman scored twice as LR scored three of the next four goals in the contest to grab a commanding 12-5 advantage.

The Railsplitters would come roaring back thanks to an 8-1 scoring run over the next 18 minutes of game action. Avery Van Der Ziel had three goals and her sister Ali had three of her own and Jaedyn Ryba netted the equalizer with 12:13 to play as LMU came all the way back to tie the game at 13.

The Bears were unfazed and ended the game with three straight goals to earn the win. LMU went scoreless over the last 12:13 as Lehman, Ellie Campbell and Morey sealed the victory with one goal each.

Campbell had four goals and an assist and Morey finished with four goals and two helpers. Smith would add three goals and three assists to go with a pair of caused turnovers. Kaitlyn Lehman notched a hat trick on just four shots and added a pair of ground balls.

Campbell, Alexa Burghardt and Emilee Foxall each had three draw controls for the Bears and Lafler had three caused turnovers. Teanna Sieben made 13 saves in goal, including three in the final minute to halt the late comeback attempt.

Heading into the final week of the season, LR is now one of four teams with four losses in league play. With her three caused turnovers , Lafler has 73 on her career which places her fourth in program history.

Smith’s three assists tied a career-high. She also had three against Belmont Abbey and Newberry in 2020. Smith also reached 80 career goals with her hat trick.

Lehman recorded her second hat trick of the season and the third of her career.

Lenoir-Rhyne is 6-9, 4-4 in the South Atlantic Conference. The Bears close out the regular season with road trips to Catawba (Wednesday) and Mars Hill (Saturday).