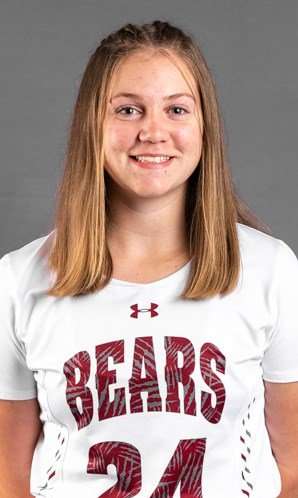 Jolan Morey had a hat trick in the win for the Bears.
photo courtesy of Lenoir-Rhyne Athletics

The Lenoir-Rhyne women’s lacrosse team earned a crucial late-season victory at Catawba on Wednesday night, 9-6. The Bears move past Catawba in the league standings with the win and control their own destiny in locking up the No. 4 seed and a home game in the SAC Tournament next week.

Jolan Morey got the Bears started with the first goal of the game just over three minutes into the contest. After Catawba netted the equalizer, LR would finish the first quarter on a 3-0 scoring run. Chloe Christensen went back-to-back with goals and Morey added her second as the Bears took a 4-1 lead.

LR was held scoreless in the second quarter but only allowed Catawba to get one goal closer as the Bears went into the break with a 4-2 lead. Ellie Campbell and Suzy Smith pushed the LR lead to 6-2 in the early stages of the third quarter and Alexa Burghardt was credited with the helper on Smith’s score.

Morey completed the hat trick with her 26th goal of the season and extended the Bears scoring spurt to 3-0. Catawba scored with nine seconds left in the third quarter to cut the deficit to 7-3 but Smith had the answer to push LR’s lead back to five.

The Indians scored two in a row to make it 8-5 but Campbell sealed the victory with a goal with 8:44 to play. Catawba would score once but never get any closer than three in the final stretch.

Isabelle Dunnam and Cassie Lafler each finished with four caused turnovers for LR and Teanna Sieben made eight saves in the win.

LR moves to 10-1 all-time against Catawba and is 6-0 all-time at Shuford Stadium. The Bears now sit in a tie for fourth place in the SAC but hold the tiebreaker over Lincoln Memorial thanks to Saturdays victory over the Railsplitters.

A win over Mars Hill on Saturday secures the No. 4 seed in the SAC Tournament. Each of the top four seeds hosts a SAC Quarterfinal game on Tuesday night. Smith’s two goals give her 82 on her career which ranks 10th in program history.

Dunnam already owns the single-season record for caused turnovers and her four more in this contest gives her 42 on the year.

Lenoir-Rhyne is 7-9 overall, 5-4 in the South Atlantic Conference. The Bears will finish up the regular season on Saturday with a road trip to Mars Hill.

Senior right-hander Jason Cornatzer turned in one of the best starts of his career, Sunday,…