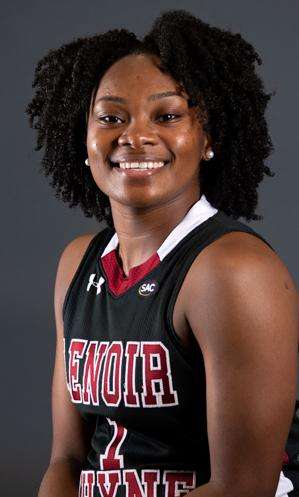 Azariah Fields scored 16 points, one of two Bears to have that many points in the win.
photo courtesy of Lenoir-Rhyne Athletics

The Lenoir-Rhyne Women’s Basketball opened their home schedule with a 90-52 win over Lees-McRae. The Bears defense forced 35 turnovers on the night as the Bears move to 3-0 on the season. Brandi Hudson and Azariah Fields each had 16 points while Emily Harman added 14 points as the Bears scored 90 points for the first time since the 2017-18 season. The last time LR scored 90 points was against Mars Hill on December 13, 2017.

After Lees-McRae won the first three games in the all-time series, the Bears have now won the last nine game. Harman is four points away from 700 career points. The Bears won their home opener for the second straight season. This was the largest margin of victory for the Bears since defeating Mars Hill 81-47 on January 27, 2021. This is the first of four straight games at home for the Bears.

The story of the first half was the Bears defense forcing fifteen turnovers in the half, leading to fourteen points. The teams played to a 18-18 tie after one quarter but the Bears went on a 8-0 run to start the second quarter and then expanded their lead to 13 at intermission. Hudson scored all eight of her first half points in the second quarter. Harman had 10 first half points to lead all scorers while Fields added nine points and three assists. The Bobcats’ six of ten baskets in the first half were from long range as they hit 46% from three in the half while the Bears only shot 2-11 from deep.

The second half was all Bears as they out scored Lees-McRae 48-23 in the half. LR shot 50% (8-16) in the third quarter and 45.6% (8-19) in the fourth quarter as the Bears have now had at least a twenty point lead in all three games so far this year. Jalen Gathers had nine points in the second half while Hudson added 8 points in second half as well.

The Bears forced twenty more turnovers in the second half as the Bears had 16 steals in the contest lead by three by Bella Sims. In total, ten different Bears recorded a steal in the contest.

Fields and Hudson each had 16 points to lead the Bears while Harman added 14. Hudson just missed a double-double as the senior had nine rebounds (five offensive). Hudson and Megan Landsiedel each had four assists as the Bears assisted on 19 of 31 baskets.

LR has held each of their first three opponents to exactly 52 points.

The Bears will continue their four game home stand with a non-conference tilt with King. Tip-Off is at 4:00 PM inside Shuford Arena.