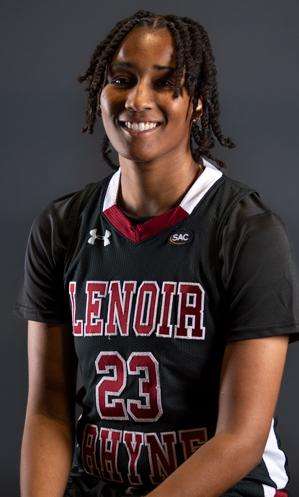 The No. 17/18 ranked Lenoir-Rhyne Women’s Basketball returned to the Shu and held on for a 60-52 victory over Emory & Henry on Saturday. The Bears saw the Wasps cut their 24-point second half lead down to five points with just 1:35 left but the Bears scored five of the game’s last seven points to come away with the victory. Jalen Gathers scored 17 points while Freedom High grad Blaikley Crooks added 16 points for the Bears and Emily Harman pulled down a career-high thirteen rebounds as well.

Both teams started slow as Emory & Henry pulled ahead for a quick lead. However, it did not last long as the Bears took the lead with 6:55 left in the first quarter and the Bears never looked back.

Even with the slow start, LR lead by 11 after the first quarter and 18 at halftime as the Bears defense held the Wasps to 22.2% shooting in the first half. The Bears did not light up the shooting percentage either (30.8%) but they forced 14 turnovers in the half and got to the foul line 14 times. The Bears hit 13-14 from the charity stripe in the half.

Gathers scored 12 in the half while Crooks added 10. Emily Harman grabbed eleven board and added three dimes in the first twenty minutes. Emory & Henry was held to just 16 first half points.

The Bears looked like their were cruising to their 13th straight home win as LR had an 18 point lead heading to the 4th quarter. However, the Wasps had one last run in them. Emory & Henry went on a 13-2 run to cut the lead to 55-50 with 1:35 left. After a timeout, the Bears responded with a quick 5-0 run. Layups by Maddie Dillinger and Crooks and a free throw by Azariah Fields put the game away. LR shot 21-71 on the afternoon (29.6%) their lowest output of the season but the Bears held a +10 advantage on the glass which helped them hold a 17-8 advantage in second chance points.

Gathers reached double-digits for the third straight game as the grad student had 17 points. Harman had a season-high thirteen rebounds and five assists. Crooks had 16 points and seven rebounds on the evening.

This game is the first-ever meeting for the programs as the Wasps entered the SAC this season. Crooks scored her 500th career point today as the junior is averaging 12.8 points per game this season.

Bears improved to 9-0 at home this season and has a 13 game home winning streak. Harman had her 7th double-digit rebounding game of her career tonight but the junior was held scoreless for the first time in her 59th career game as a Bear.

The Bears have not had a single player achieve a double-double this season.

Lenoir-Rhyne is 16-1 overall, 6-1 in the South Atlantic Conference. The Bears will head to Newberry on Wednesday for a 5:30 tip-off.