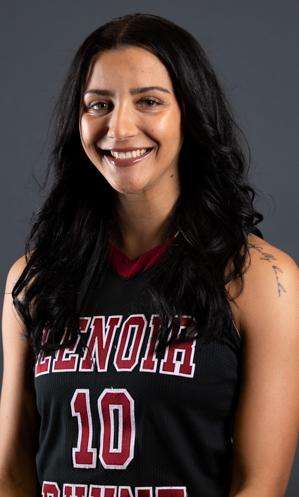 Hannah Stull, a Newton-Conover grad, had a career high 23 points for the Bears.
photo courtesy of Lenoir-Rhyne Athletics

The Lenoir-Rhyne women’s basketball team were down by as many as 17 points in the second half and battled all the way back to cut the Wolves lead down to one but the Bears could not hit a potential game-winning shot before the buzzer as Newberry held on for a 63-62 win inside Eleazer Arena Wednesday night. The Bears dropped their fourth straight game at Newberry, including the last two by a single point. Newton-Conover grad Hannah Stull had a career-high 23 points and the Bears first double-double of the year in the losing effort.

Neither team had more then a one possession lead in the first quarter as both teams struggled to score and only put up 12 points apiece in the opening frame. Newberry did shoot 45% from the floor in the first quarter but, due to seven turnovers, the Wolves only got 11 shots up in the quarter.

Newberry held a 24-15 advantage on the glass in the first half as ten different Wolves pulled down boards in the half.

The Bears went 0-7 from long range in the half as Newberry went 3-5, all three in the second quarter.

The Bears were aggressive coming out in the second half getting to the foul line ten times in the third period but only drilled six of them as LR could only cut the lead to 50-38 heading into the final period.

The Bears cut the lead to 56-42 with just over six minutes left after an old-fashioned three point play by Harman but Newberry extended the lead back to double-digits after a three by Payton Cronen with 5:33 left to go.

Crooks scored five straight points, including three from the line, to cut the lead to 56-51 with 3:39 left.

Harman forced a turnover and then came down and drained a mid-range jumper to cut the lead to 56-53 with 3:11 left. LR kept getting to the charity strip as Fields and Stull went 4-4 from the line in the next two possessions to cut the lead to one with just over a minute left.

After the Wolves hit a couple free throws to extend the lead to 62-59 with 1:01 left, the Bears had two open looks at it from deep but shots by Crooks and Gathers both fall short. The Wolves then split a pair of free throws to push the lead to four before Stull hits a three pointer with 5.1 seconds left to cut the lead to 63-62.

The Bears fouled the Wolves’s Erick Wiseley before any time run of the clock and Wiseley missed both free throws however the Bears could not get a shot off before the buzzer as the Wolves held on for the upset.

Stull had a career-high 23 pointers on 7-of-9 shooting including a pair from long range. Stull also pulled down ten rebounds for the Bears first double-double of the year. Crooks added 15 points, five rebounds and five steals on the evening.

Bears got to the free throw line 29 times in the contest, led by Stull’s 7-10 from the charity stripe.

The Bears lost 67-66 at Newberry to end the season last year. The home team has now won the last seven games in this series. Due to an unbalanced conference schedule, these teams will meet for a third time in Shuford Arena in just ten days.

Jalen Gathers averaged 6.8 points in the first 13 games but since the calendar flipped to 2023, Gathers has averaged 13.7 points per game.

With Megan Landsiedel out with an injury for this contest, the Bears had to adjust their starting lineup for the first time this season as Landsiedel, Stull, Emily Harman, Azariah Fields and Blakeley Crooks started the first seventeen games this season. Gathers got her first career start tonight for the Bears. LR had to play without third-leading scorer Brandi Hudson as well.

The Bears will remain at 749 all-time wins as the next victory will be the program’s 750th.

The Bears fall to 16-2 overall, 6-2 in the South Atlantic Conference. LR will head to Carson-Newman on Saturday. Tip-off is scheduled for 2pm.