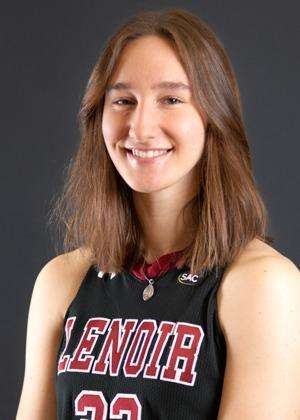 Maddie Dellinger led the Bears with 12 points, a season high for the sophomore.
photo courtesy of Lenoir-Rhyne Athletics

The Lenoir-Rhyne Women’s Basketball used a 13-0 4th quarter run to come from behind to defeat Coker 58-43 on Wednesday evening in Hartsville, South Carolina. The Bears outscored Coker 25-7 in the final period to rebound from their first loss of the season last Wednesday. Maddie Dillinger had a season-high 12 points while Emily Harman added 11 points and five rebounds.

The Bears opened the game hitting just two of their first 14 shots as the Cobras raced out to an eight point lead in a low scoring opening quarter. After scoring just seven points in the first quarter, the Bears scored eight straight to start the second quarter in the first two minutes to tie the game at 15.

The Bears then scored just six points the rest of the half as Coker took a 23-21 lead into halftime as the Bears shot just 24% in the half (6-25). Seven different Bears scored in the half but Freedom High School grad Blaikley Crooks led the Bears with just five points.

The Bears cold shooting continued in the third quarter as LR shot under 32% for the third straight quarter as Coker extended their lead to three entering the final quarter. LR was held to just 12 points in the third quarter. After the Bears tied it at 40-40, LR went on a quick 6-0 run to force Coker to use a timeout with 5:11 left in the game. After the timeout, the Bears extended their run scoring the next seven points for a 13-0 run.

LR remained in the DII National Polls this week. The Bears slipped to No. 18 in the D2Sida Media Poll and No. 17 in the Coaches Poll. This is the sixth straight week the Bears have been ranked. The Bears swept the season series from the Cobras, winning by 13 points in this contest after defeating them by nine points earlier this season in Hickory. This is the first season sweep of the Cobras since the 2019-20 season.

Crooks scored seven points and needs seven more points to reach 500 career points. Hudson scored her 600th career point as a Bear with her basket in the first quarter. After averaging 76.78 points in the first fourteen games this season the Bears have scored just 58 points the last two games.

Lenoir-Rhyne improves to 15-1 overall, 5-1 in the South Atlantic Conference. Emory & Henry comes to Hickory for a 2:00 tip-off this Saturday.