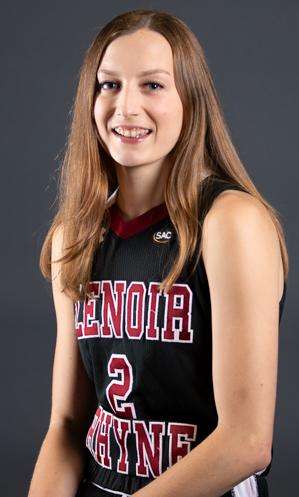 Megan Landsiedel scored 13 points and was one of four to score in double figures for the Bears.
photo courtesy of Lenoir-Rhyne Athletics

For the first 60 years of the Lenoir-Rhyne Women’s Basketball program, the Bears have started 10-0 only two times but on Monday night inside Shuford Arena, the Bears defeated UNC Pembroke 71-48 to move to 10-0 for third time and the first since the 1979-80 season. Four Bears scored in double figures on the evening lead by 13 from Megan Landsiedel.

It was a well played first quarter as both teams shot over 50% from the floor. UNC Pembroke led early but a late run by the Bears to close the quarter gave the Bears a 21-15 lead after the first ten minutes. Landsiedel had eight points the first period and went 3-3 from the floor including two bombs from long range.

The Bears defense forced nine turnovers in the second quarter to help them grow a 13 point lead during the second period. Bears had the 10-0 advantage on fast breaks during the first half.

The Bears assisted on eleven of twelve field goals in the half.

In the second half, both teams got fourteen shots off in the third period but the Bears drained seven of the fourteen while the Braves only hit four in the period as the Bears extended their lead to 17 after three quarters.

For the seventh time this year, the Bears had at least a twenty point lead during the game as the Bears grew their lead to 25 points in the 4th quarter.

LR dominated the glass with a 37-24 advantage. The Bears doubled up the Braves 10-5 on the offensive side and only allowed four second chance points.

Landsiedel (13), Blaikley Crooks (12), Harman (11) and Brandi Hudson (10) all reached double figures on the night. Azariah Fields just missed with nine points as Fields also added seven rebounds and five assists on the night. Harman now has 799 points in her career.

Landsiedel, who is 18th in the nation in steals per game added four more steals in the contest.

The Bears started 10-0 during the 1977-78 season on the way to a 19-4 season. LR started 15-0 during the 1979-80 season. The Bears currently have a ten game home winning streak. The Bears are 6-0 this season inside Shuford Arena and also won their last four games last season at home.

LR will return to SAC play when Newberry comes into town on Wednesday. Tip-off is schedule for 5:30 in Shuford Arena.