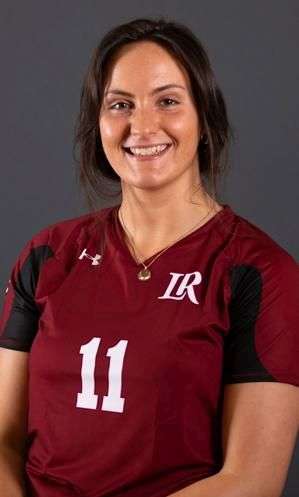 Emma Clark, a CVCC graduate, was one of two Bears with 13 kills in the contest.
photo courtesy of Lenoir-Rhyne Athletics

The Lenoir-Rhyne Women’s Volleyball team saw their 17 game home winning streak snapped Saturday afternoon by Tusculum. Tusculum won the first two sets but the Bears comeback attempt ended with a 25-21 loss in the fourth set, giving the Pioneers the victory. The Bears last loss at home was February 26, 2021 against Mars Hill. Emma Clark and Colette Romp lead the Bears with 13 kills on Saturday.

The Bears tried to force a fifth set and had an early 11-9 lead but the Pioneers went on a 6-0 run to take a 15-11 lead and did not look back. The Bears had one more run after a Romp kill got it back within one at 15-14 but the Pioneers won four of the next five points and finished the set and the game with a 25-21 victory.

Five Bears had double digit digs lead by 16 from Bailey Carpenter and Emmaleigh Allen. Hawkins had a double-double with 11 kills and 11 digs.

The Pioneers snapped a three game losing streak to the Bears including last years SAC semifinals as the Bears took down the No.1 seed Pioneers in four sets. The loss moves the Bears to 7-2 in the SAC.

After hitting .524, Clark is now hitting .473 on the season, which leads the SAC. Carpenter is now third in the SAC with 231 digs on the season and fourth with 4.20 digs per set.

The Bears drop to 12-5 overall, 8-2 in the South Atlantic Conference. LR will travel to Carson-Newman on Friday. First serve is schedule for 7pm.