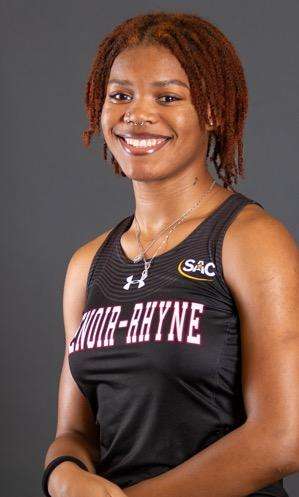 Melody Jones won both the 60 meter hurdles and the long jump.
photo courtesy of Lenoir-Rhyne Athletics

The Lenoir-Rhyne Track and Field team opened up the 2023 portion of the indoor season at the Finn Pincus Invitational on Friday and Saturday. The Bears broke multiple records on the weekend and had a strong showing.

Dario Matau and Royce Turner opened up the competition by qualifying for the 60m and the duo would take #1 and #2 in the event. Matau crossed at 6.80 with Turner clocking in at 6.93 with Matau’s time representing the fourth-fastest in the event in program history and just 0.01 off his personal mark.

The women’s 60m saw newcomer Alexis Brown continue her strong start with a first-place finish in 7.50. Jordan Shealey (4th) and Melody Jones (8th) also finished strong for the Bears. Brown’s time was the second-fastest in program history as she now holds the top two times in program history in her freshman season.

LR took wins in the 60m hurdles on both the men’s and women’s sides in the meet as well. Clarence McGill’s time of 8.40 was a personal record, 0.06 better than his previous best time. Philip Stomne took third in the event and Oliver Thatcher was fourth. Melody Jones earned the top finish for the women with a time of 8.65 which breaks her own record in the event by nine-tenths of a second.

Orlando Descartes took home the top spot in the high jump with a leap of 2.03m and Wadsworth was first in the long jump at 7.10m. Descartes’ number sets a program record and Wadsworth’s ranks third in program history. Oliver Thatcher would finish second behind Wadsworth with a jump of 6.73m.

Jones would win the women’s long jump with a leap of 5.59m, tying a program record along with Savannah Watkins from 2020.

Nick Henriques and Malakei Sumner finished third and fourth respectively in the men’s triple jump for the Bears.

Holly Kone finished second in the women’s triple jump with a score of 11.53m, the second-best mark in program history.

The Bears will return to action on Friday and Saturday as they travel to the South Carolina Invitational.