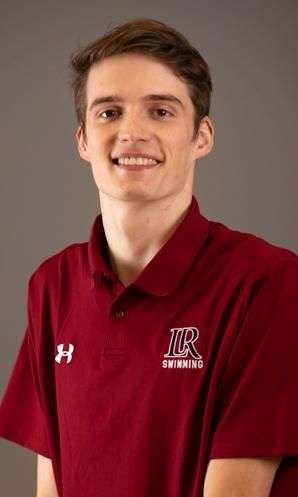 Hickory native Micah McRea had one of the top finishes of the weekend for the Bears, finishing sixth in the 200 IM.
photo courtesy of Lenoir-Rhyne Athletics

The Lenoir-Rhyne Women’s Swimming won each and every event for the second straight event to open their 2022-23 season. On Friday evening, the Bears defeated Mars Hill and Converse to win the Lenoir-Rhyne Tri-Meet.

The Bears won both relays to bookend the meet. To start the event, Lenoir-Rhyne won the 200 Medley Relay with the team of Ella Penny, Kayana Taylor, Lisa Boernigen and Elizabeth Bowman with the time of 1:53.42. Taylor and Penny than joined Riche Putnam and Anna Harshaw to win the 200 Free Relay to finish the sweep with a time of 1:44.49.

On the individual side, seven Bears won events on Friday in the Bears home opener. Camille Brown got the Bears going with a win in the 1000 Free with a time of 11:27.53. Five different Bears won the freestyle events. After Brown won the 1000 Free, Taylor won the 200 Free, Putnam took home the 50 Free and Boernigen won the 100 Free with Bowman finished the sweep in the 500 Free.

Boernigen is coming off the SAC Swimmer of the Week Winner as the All-American won three events on Friday. Boenigen won the 200 Fly and 200 IM along with the 100 Free as mentioned.

The Bears will head to Catawba for a Tri-Meet with the Indians and Wingate next weekend.