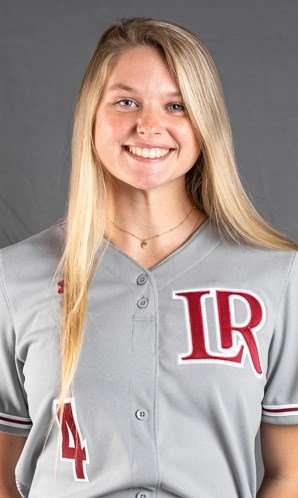 Hannah Jennings went a combined three-for-six batting in the doubleheader with a run scored.
photo courtesy of Lenoir-Rhyne Athletics

With her solo home run in the 6th inning of game two, Kylee Leonhardt became the program leader in RBIs breaking a ten year mark set by Sarah Atkins. The RBI was Leonhardt’s 191st RBI in her career as the Bears split with Carson-Newman to end the regular season. Lauren Rakes struck out 11 Eagles in a 2-1 win in game one but the Eagles used a three-run first to earn the split on the day as L-R lost the second game 6-2.

Game one featured another pitching dual as the game was scoreless until the 6th as the Bears finally broke through with a wild pitch that scored Savannah Moorefield. Julia Mardigian followed by driving in Hannah Jennings with an RBI single to give the Bears their lone runs of the game.

Rakes held the Eagles scoreless until the 7th when the Eagles had their best inning. Carson-Newman finally pushed one across the plate then had first and third with two outs but Rakes got Syerra Rogers to pop out to Jennings to end the game. Two of the Eagles three hits were in the bottom of the 7th.

Rakes finished with 11 strikeouts and picked up win No. 19 on the season in the circle. The Bears only had four hits in the contest, two by Jennings and a singles by Mardigian and Wall.

In game two, Mardigian got the Bears on the board again this time an RBI double in the first inning but the Eagles responded quickly with three runs in the bottom half. After the Eagles added a run in the bottom of the 5th, Leonhardt took the first pitch she saw to left center to break the program record with her 191st RBI. The long ball was her 15th homer of the season.

CN added two insurance runs in the 6th and the Bears went three up and three down in the 7th as the Eagles took game two 6-2 to earn the split. Morgan Beeler took the loss in the circle, pitching 1 2/3 innings allowing two runs but walked five Eagles. Rakes came on in relief to finish the game throwing 4 1/3 innings.

The Bears were held to just a single hit in the first, third and sixth innings as the Bears collected just seven hits in the two games combined. This is the Bears first visit to Jefferson City since April 14, 2018. The last six games in this matchup have been either in Hickory or in the postseason.

The Bears pitching staff crossed the 400 strikeout mark, just the 4th time in program history that feat has been reached. With the win in game two, the Bears finished second in the SAC this year.

This is the third time the Bears have finished runner-up in the SAC during the regular season.

Lenoir-Rhyne is 36-13, 18-6 SAC. The Bears will be the No. 2 seed in this year’s SAC Conference Tournament. LR will play at 4:00 PM on Friday against the Tusculum as Lincoln Memorial will host this years SAC Tournament.

3A: Hickory: 6 Lake Norman Charter: 3 The Red Tornadoes advance to the semifinals where…