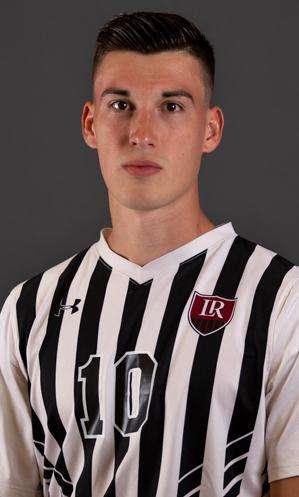 Luis Hernandez perfectly struck the game’s only goal in the 48th minute, and Lenoir-Rhyne Men’s Soccer won its first SAC Tournament title since 2006 with a 1-0 win over Lincoln Memorial in the SAC Tournament Final at American Legion Memorial Stadium in Charlotte. The Bears will receive the SAC’s automatic bid to the 2022 NCAA Tournament, and will be back in the tournament for the second year in a row.

The Bears controlled the majority of the possession in the first half, and out-shot the Railsplitters 11-3 in the first half. However, LMU did have the best chance of the first half that was turned away on a miraculous save by Juan Basabe, who registered his eighth clean sheet of the year.

In the second half, it didn’t take the Bears long to strike. On a give and go with Juan Hoyos, Hernandez hit a perfect strike from just outside the box to beat the goalkeeper to the left post and give the Bears the only tally they would need in the game.

The Bears had four corner kicks in the first half to LMU’s one. LR did not register a corner in the second half, and fought off all three they faced after halftime. The one save Basabe made in the first half on a shot from Christian Hatley was the only one he had to stop on goal in the game as the LR defense in front of him locked the Railsplitters down.

This is LR’s fourth SAC Tournament Championship in program history, and the first since 2006. The Bears improve to 4-3 all-time in the SAC Tournament Final and break a two-game losing streak in the game. The Bears have beaten LMU three straight times and four out of the last five meetings. The Bears outscored their opponents 6-1 in the three SAC Tournament games and did not concede a goal in the semifinal or final.

The goal was Hernandez’s fifth goal of the year, and his first game-winner.

Lenoir-Rhyne is 12-4-2 on the season. With this win, the Bears earn the SAC’s automatic bid into the 2022 NCAA Tournament, and will find out their seed on Monday when the NCAA selection show airs.