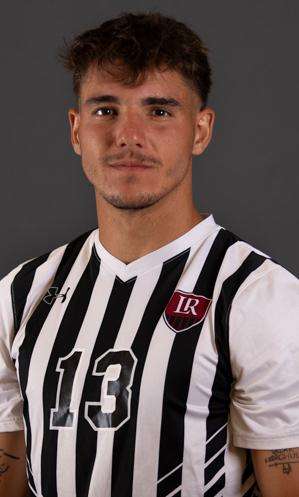 Dani Fernandez scored the game winner for the Bears in the high scoring contest.
photo courtesy of Lenoir-Rhyne Athletics

In a game that saw five combined goals in the second half, it was Dani Fernandez with the eventual game-winner as the No. 8 Lenoir-Rhyne men’s soccer team erased a one-goal deficit late in the second half for a 4-3 win over Anderson at home. Harri Rowe, Adrian Martina and Ivan Rubio all found the back of the net for the Bears in their highest scoring game of the season.

The two teams played to a 1-1 tie in the first half. The first goal of the game came in the 11th minute from Harri Rowe, a snipe from outside the box near the sideline that somehow found its way inside the right post. The highlight reel play was Rowe’s first goal of the season, and the second of his career.

Anderson tied the game before halftime off a corner kick finish from Diego Jaramillo, his fourth goal of the year. The Bears out-shot the Trojans 11-6 in the first half, but Anderson scored on its only shot on goal.

Martina continued his strong season for LR, scoring his sixth goal of the year just five minutes into the second half on a beautiful feed from Rubio that traveled over 50 yards in the air. He beat the Anderson goalkeeper top shelf for a 2-1 lead. The Trojans tied the game just six minutes later after a defensive breakdown on a cross led to Pablo Sanz firing a shot past Juan Basabe to tie the game at two.

Anderson took the lead just two minutes later. A controversial penalty on Jaime Poza in the box led to a penalty kick, and Joao Martinho of Anderson beat Basabe to give the Trojans their first lead at 3-2 with just over 30 minutes to play. The Bears had plenty of chances in the next 20 minutes, but were not able to break through until Poza drew a corner kick on a great hustle play. He took the corner and placed it beautifully, where Rubio was there to bury it and tie the game.

The Bears weren’t done yet. Less than three minutes later, Poza took another free kick at about 45 yards out, and the Bears perfectly executed a set piece that ended with Fernandez heading the game-winning goal past the Anderson keeper. Fernandez’s game-winning goal is the second of his career. Poza’s two assists give him four for the season, which is second in the SAC.

The Bears finished with 23 shots, 10 of them coming on goal.

LR has now won three straight games against Anderson. The Bears have scored four goals against the Trojans two years in a row. 12 out of the last 14 meetings between the two teams have been decided by one goal or less. LR is now 3-0 in one-goal games this year.

Lenoir-Rhyne is 6-1-1 overall, 3-1 in the South Atlantic Conference. The Bears travel to Mars Hill on Saturday at 3:30 p.m. to continue conference play