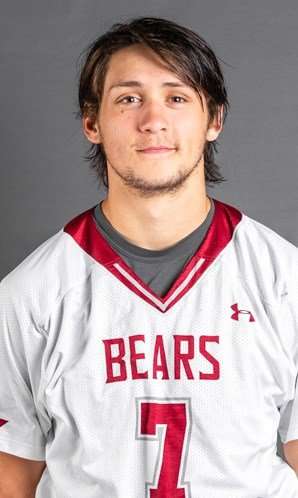 Will Canata had three goals to pace the Bears.
photo courtesy of Lenoir-Rhyne Athletics

Lenoir-Rhyne mounted a furious comeback attempt in the fourth quarter and scored three straight goals to cut a five-goal deficit to 13-11 with 3:16 to play but LR would pull no closer in a loss to Tampa in the NCAA Quarterfinals. The Bears defeated Tampa in this round almost exactly one year ago (May 16, 2021) in overtime but the Spartans avenged that loss and stayed undefeated on the season.

The Spartans jumped out early, scoring the first two goals of the game but LR would answer to even it at two with goals from Bryce Reece and Will Canata. Tampa grabbed three straight to move up 5-2 with 3:56 to go but again LR would answer. A 3-0 run from the Bears would tie the game at five just 54 seconds into the second quarter.

Daniel Fitzpatrick (Tampa) and Tommy Aguilar would trade goals before Tampa took the 7-6 advantage on a Colin White goal, a score that stood to the halftime break. Tampa and LR saw defenses tighten in the third quarter with just three goals being scored. Reece added his second for the Bears but Tampa would outscore LR 2-1 in the period and go up 9-7 after three.

The turning point of the game was a quick start to the fourth quarter for Tampa. The Spartans scored three times in the first 58 seconds of the quarter to push ahead 12-7. This marked the second straight tournament that Tampa led LR by five in the second half of a tournament game as LR erased a 10-5 deficit in last year’s win. The Bears would trade a goal with Tampa and stared a 13-8 deficit down with 8:58 to go. Joe Venazio, Toron Eccleston and Aguilar found the back of the night in the 3-0 spurt for LR as 3:16 remained.

The Bears went man-up with just over two minutes to play but Aguilar’s two shots were saved as Tampa ran out the clock down the stretch. Canata finished the game with a team-high five points on three goals and two assists. Reece, Eccleston and Aguilar each netted two goals.

White led Tampa with five goals and Fitzpatrick had two goals and an assist. Hunter Turner won 14-of-27 face offs but went 10-for-13 in the second half to swing momentum. Turner finished with nine ground balls.

Tampa dominated the ground ball category, grabbing 37 to just 25 by the Bears. The player of the game for Tampa was goalie Blake Ulmer who made 21 saves. Noah Johnson had 12 stops for the Bears.

LR never led in the game and only led for 4:56 in the two games this season against Tampa. The Spartans won on Feb. 20 in Savannah, Ga. by a final of 13-8. Canata’s five points were a season high as were his three goals.

Tampa was the only loss this season that LR couldn’t avenge. The Bears dropped to Limestone and UIndy in the regular season but came back to beat both in postseason play. LR drops to 0-4 on the year when they trailed at halftime.

Tampa had lost in the Quarterfinal round for three straight years before winning this contest. LR is now 4-4 all-time in NCAA Tournament play.

LR and head coach Greg Paradine conclude the 12th year in program history — all with Paradine at the helm — with a 15-4 record and own a 121-64 all-time mark. LR will head into the offseason as back-to-back SAC Regular Season and Conference Tournament Championship and will look for a three-peat next year.

Eli Ellington and Trey Jernigan were exceptional on the mound for the Mountaineers Saturday, but…

Hickory Crawdads Jump On Dash Early in Picking Up Win

The Hickory Crawdads scored four runs in the first inning, and would cruise to an…