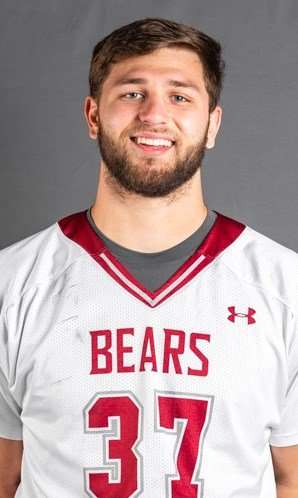 Dylan Stape scored the game winner for the Bears with 46 seconds remaining in the contest.
photo courtesy of Lenoir-Rhyne Athletics

With 46 seconds left in regulation, Dylan Stape took a pass from Colten McCracken and found the back of the net to break a 10-10 tie over eighth ranked Indianapolis and send Lenoir-Rhyne on to the National Quarterfinal for the second straight year and the third time in program history. The goal was just Stape’s fourth of the season 13th of his career as a short stick midfielder but one that will go down in LR Men’s Lacrosse lore.

“Coming down, I saw Colten was double teamed and I kind of sat in the middle,” said Stape. “We do it every day in practice and he looked off and threw it to me. At first, I was like ‘oh shoot, I have the ball’ but then I found the back of the net. It was awesome.”

The University of Indianapolis scored the opener, making it three straight games that LR gave up the first goal of the game but rebounded to win the game. LR’s first run of the game was a 4-0 spurt in the first quarter on goals from McCracken, Tommy Aguilar, Toron Eccleston and Bryce Reece.

Indy scored with 10 seconds left in the quarter to make it 4-2. Defense reigned in the second quarter as each team scored just once. LR was held scoreless the last 14:33 of the half after Aguilar’s second goal of the game.

Coming out of the break up 5-3, LR pushed the lead to three with a goal from Eccleston. Indy answered but Victor Powell and Will Canata went back-to-back to make it 8-4 with 5:23 left in the third. LR was also up four at 9-5 with 3:39 left in the third quarter but the Greyhounds would come storming back. Owain Braddock and Wyatt Auyer made it 9-7 but Eccleston extended the lead to 10-7 going into the fourth quarter.

Indy scored three straight to knot the game at 10-10 as Braddock scored twice and Parker Johnson finished his hat trick.

From the 4:19 mark until the 46-second mark, neither team scored. McCracken took a loose ball and pushed in transition, finding Stape for the game-winner. However, the Bears would turn the ball over after winning the ensuing face off, giving the ball back to the Greyhounds. UIndy took a timeout with 37 ticks on the clock. The Bears had a tremendous defensive possession but Braddock got a shot off with just two seconds left. Noah Johnson made the big save to seal the victory.

“We got into the huddle and I told the guys, just get into their hands,” said Johnson of the game-securing save. “Just let me see the shot and I’ll make the save. That’s pretty much exactly what we did. They got a nice shot that I saw all the way through and made the save. I looked up and saw the clock run out and just started celebrating.” With his 16 saves, Johnson passes Ryan Crompton with 623 career saves as the program’s all-time leader. He also passes Crompton as the all-time leader in wins with 41.

This was the second meeting this season between LR and UIndy and each were decided by one goal. The Greyhounds beat LR at Moretz Stadium in the season opener on Feb. 6, 12-11. UIndy suffered their second-consecutive one-goal loss in the NCAA Tournament at Moretz Stadium. The Greyhounds lost in the First Round in 2021 to Wingate thanks to a Bulldogs goal with nine seconds left in the game. Three of UIndy’s four NCAA Tournament defeats have come by one goal.

The Bears are 4-3 all-time in NCAA Tournament games and face Tampa on Sunday. The game with the Spartans is a rematch of last year’s NCAA Quarterfinal classic that saw LR prevail 16-15 in overtime. LR and Tampa met in the regular season with Tampa winning 13-8 on Feb. 20.

The Bears are now 102-3 all-time when leading after three quarters. The win extended the Bears winning streak to 11 straight.

LR will head to No. 1 and undefeated Tampa on Sunday at 1 p.m. with a spot in the Final Four on the line.