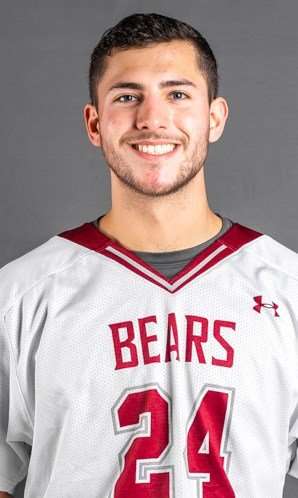 The Lenoir-Rhyne Men’s Lacrosse Team celebrated Senior Day before drubbing Lincoln Memorial 22-3 at Moretz Stadium on Saturday afternoon. Prior to the game, LR celebrated its nine seniors who improved their cumulative record to 40-14 since the start of 2019.

LR netted the first three goals of the game as Mitchell Linklater, Evan Voss and Bryce Reece put the Bears up 3-0 after the first quarter. LMU would break their scoreless drought with 13:29 left in the second quarter but the Railsplitters would be held without a goal until the 6:15 mark of the fourth quarter.

After LMU’s first goal made it 3-1, the Bears put together an 18-0 run as 14 different players scored a goal for the Bears in that stretch. LMU would score a pair of goals in the fourth quarter to keep the deficit under 20.

Kyle Hatcher finished with his third career hat trick in the win. Hatcher’s other two hat tricks came in the NCAA Tournament in 2021 with four goals against Tampa and three against Wingate. Myles Moffat, Toron Eccleston, Jaden Goldstein, Reece and Voss each finished with two goals and Reece added a pair of helpers.

Noah Johnson earned his 35th career victory with three saves and was one of three goalies to see action. The Bears held a 56-13 advantage in shots and went 19-of-21 on clear attempts. The Bears also dominated the ground ball stat, winning 49-21.

Lenoir-Rhyne finishes the regular season with an 8-1 mark at home. Over the past three years, LR is 23-2 at Moretz Stadium. The Bears can capture a second straight SAC Regular Season Championship with a win over Mars Hill on Saturday. The Bears would be co-champions with Limestone who each have one loss in league play.

LR is a perfect 7-0 all-time against Lincoln Memorial and have won the past two by a combined score of 40-9. LMU remains the only team in program history that LR has shut out. The Bears beat LMU 8-0 on Feb. 28, 2015.

The 19-goal margin of victory is the biggest blowout in series history.

The 13th ranked Bears improve to 11-3 overall, 8-1 in the South Atlantic Conference. LR will return to action on Saturday in the regular season finale at Mars Hill at 4 p.m.

For the second straight year, the Lenoir-Rhyne Men's Lacrosse Team placed eight players on the…