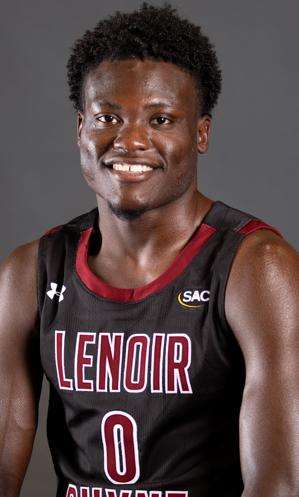 Damion Medwinter led the Bears with 14 points in the overtime win.
photo courtesy of Lenoir-Rhyne Athletics

The Lenoir-Rhyne Men’s Basketball Team went to overtime and defeated Chowan 66-64 on Monday afternoon in Shuford Arena. Damion Medwinter came off the bench to score 14 points and had a game-saving rejection in overtime as the Bears closed out the first semester with a narrow victory.

The Bears led for 17:24 of the first half before the Hawks rallied to take a 28-25 lead late in the half. A 3-point play from P.J. Joseph with 27 seconds left in the first half sent the teams into the break all even at 28.

It was a cold shooting half for both teams with LR hitting 36.7 percent of their shots and Chowan connecting on 34.5 percent. The Hawks went just 2-of-15 from long range in the opening 20 minutes. Damion Medwinter was the offensive catalyst for the Bears in the first half, hitting a trio of 3-pointers.

Chowan opened the second half on a 9-2 spurt to take the early advantage and led for much of the second half. A huge 4-point play from L.J. McCoy tied the game at 56 with 4:24 left in regulation. Chowan would once again push the lead to four at 60-56 with 2:30 to play but LR ended regulation on a 4-0 run and Medwinter’s put back in the paint with 13 second to go sent it to overtime.

The Bears scored the first four points of OT and led 66-64 at the 2:02 mark. With 30 seconds left, Chowan looked to have an open layup to tie the game but Medwinter rejected it and the Bears would eventually stop the Hawks on the next two possessions to earn the win.

This is just the third all-time matchup between LR and Chowan and the first win for LR. In the 2016-17 season, the teams met twice with Chowan sweeping those games.
– Neither team scored over the final 2:02 of overtime.

LR held Chowan to just 21.4 percent shooting from long range, the sixth opponent to shoot below 27 percent from 3-point range this season.

LR is 6-4 overall. They will be off until after Christmas when they travel to Belmont Abbey on Friday, December 30.