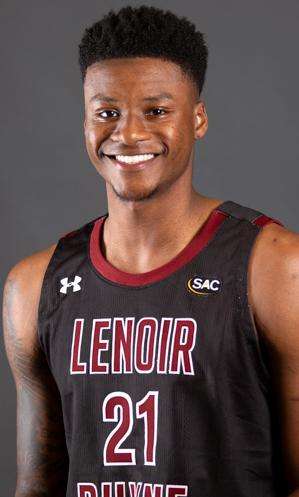 A bank shot by Newberry’s Quandaveon McCollum with 0.6 seconds left was the game-winner as Newberry handed LR a two point loss on Wednesday night in South Atlantic Conference action, 62-60. The loss is the sixth LR single-digit loss on the year and the last six losses at Newberry have also all been single-digit losses.

The first half was a defensive slugfest with LR taking a slim 22-19 lead into the break. LR was 7-of-27 from the field in the first 20 minutes and Newberry was 7-for-28 but LR led thanks to a dominant advantage on the glass.

The Bears pulled down 15 of the first 23 rebounds in the contest and seven of the first nine offensive rebounds.

The lead was never more than six in the second half and was back-and-forth in the final four minutes. A triple by Newberry put the Wolves up 55-52 but T.J. Nesmith answered with an old-fashioned three-point play to even the score.

Nesmith’s dunk on the next possession gave the Bears a 57-55 advantage before the Wolves went on a 5-0 spurt to go up 60-57. With just 24 seconds left, Damion Medwinter calmly sank a game-tying 3-pointer to even the score at 60.

On the final possession, Andrew Robinson drove to the baseline and threw a contested pass to McCollum who hit a contested 15-footer off the glass from the wing to win it for the hosts.

Nesmith led the Bears with 20 points and added four blocks and L.J. McCoy added 14 and made a trio of triples.

Newberry only turned the ball over six times in the contest. LR continues its terrific defense of the 3-point line, holding the Wolves to 31.8 percent. On the year, LR holds opponents to just 29.2 percent shooting from long range.

The Bears continued their streak of at least one three pointer made. LR has gone 270 straight games with a made three, the last time with a donut in the 3-point column was at Tusculum on Jan. 23, 2013. McCoy leads the SAC with 58 made 3-pointers on the season, two ahead of Coker’s Tate Mulkey who has played in two more games.

The Bears dropped to 1-6 on the road this season and have won just two of their past 11 road games. Newberry has beaten LR 14 of the past 15 times at Eleazer Arena.

The Bears are 8-8 overall, 3-5 in the South Atlantic Conference. LR will stay on the road to take on a struggling Carson-Newman team on Saturday at 4pm. The Eagles will come in to the weekend riding a six-game losing streak.