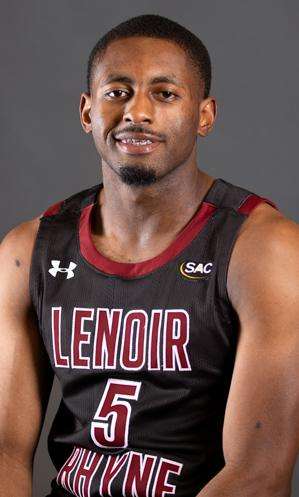 Jalen Johnson had 22 points for the Bears despite the loss.
photo courtesy of Lenoir-Rhyne Athletics

Lenoir-Rhyne rallied late but couldn’t complete the comeback in a seven point loss at Carson-Newman on Saturday, 60-53. Jalen Johnson scored 10 points in a 1:59 span late in the second half to pull LR within four but Carson-Newman pulled it out late with free throws. The Bears struggled from the field in the game and couldn’t overcome a sluggish first half that saw them score 20 points.

For the second straight game, defense dominated the first half. After seeing Wednesday’s game at Newberry go into the break with LR up 22-19, the Bears would go into half at Carson-Newman down 27-20. T.J. Nesmith was the standout on offense for the Bears in the first 20 minutes with eight points on 4-of-7 shooting. LR would shoot just 8-of-28 from the floor (28.6 percent) and went 3-of-14 from long range. C-N hit on 52.4 percent of their first half shots but turned the ball over 11 times and took just 21 shots. Nick Brenegan came off the bench to go 5-for-6 and 3-for-4 from deep to lead all scorers with 13 first half points.

The Eagles would have the upper hand much of the second half but LR had one last run in them. C-N was up as much as 14 in the second half and eight with 1:55 to play, the Bears would rally behind their point guard.

Jalen Johnson had 10 points in a 1:59 span to cut the Eagle lead to 57-53 with 1:13 to go. The Bears got a defensive stop and had a 3-point attempt with 53 seconds left to cut it to one but they couldn’t convert as Carson-Newman iced it with free throws down the stretch. Neither team shot above 38 percent in the second half and they combined for 21 turnovers and 29 fouls in the final 20 minutes. For the day, LR shot just 33% from the field and 28% from deep but were able to force 21 turnovers and turn those into 15 points.

Johnson had 22 points with 16 coming in the second half.

LR continues its terrific defense of the 3-point line, holding the Eagles to 27.3 percent. On the year, LR holds opponents to just 29 percent shooting from long range. The win ends Carson-Newman’s six-game losing streak. The Eagles hadn’t won since December 19.

This is the longest win streak for Carson-Newman over LR as they have now won five straight over the Bears. LR is 37-35 against the Eagles in the NCAA era. LR has gone three straight games without scoring above 60 points in Holt Fieldhouse.

The Bears are 8-9 overall, 3-6 in the South Atlantic Conference. LR will return home for a pair of games next week starting with Catawba on Wednesday at 7:30 p.m.