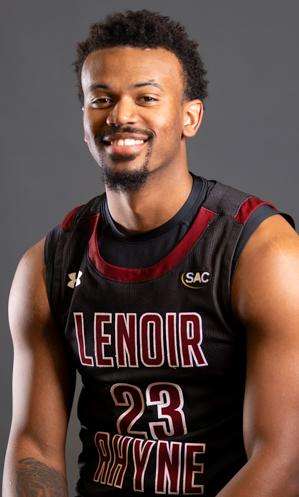 Nas Tyson had 15 points and 7 rebounds for the Bears.
photo courtesy of Lenoir-Rhyne Athletics

The Lenoir-Rhyne men’s basketball team dropped a 20-point decision to Wingate in the SAC Opener on Saturday afternoon in Shuford Arena, 89-69. The Bears were held scoreless for a stretch of 5:37 from the end of the first half through the start of the second half as the Bulldogs scored 15 unanswered and didn’t look back.

Andreas Wilson came off the bench to score 25 points for the Bulldogs and went 6-of-9 from long range. 15 of those 25 were scored in the first half as he went 4-for-5. Wingate closed the first half on a 7-0 run to take a 42-33 advantage going into the break. The Bears went just 1-of-8 to close out the first half and didn’t score for the final 2:35 of the opening half.

The Bulldogs kept the run going to start the second half, scoring the first eight points to extend the run to 15-0. With Wingate up 50-33, Salle Wilson ended the run with a bucket in the paint to end a 5:37 scoring drought. Back-to-back threes from Wilson and Nas Tyson cut Wingate’s lead to 58-48 with 12:33 to go but Wilson’s three capped a 12-5 spurt that pushed the lead back to 70-53.

Jarren Cottingham had 19 points and was 7-of-9 from the field and hit all three of his 3-point attempts. In total, five players scored in double figures for Wingate. Nas Tyson had 21 for LR and was 9-of-13 from the field. T.J. Nesmith added 15 points and nine boards.

LR was outrebounded for the fifth time this season.  The two teams combined for just 16 turnovers in the game.

The Bears are 4-3 overall, 0-1 in the South Atlantic Conference. L-R will host Newberry next on Wednesday, Dec. 14.