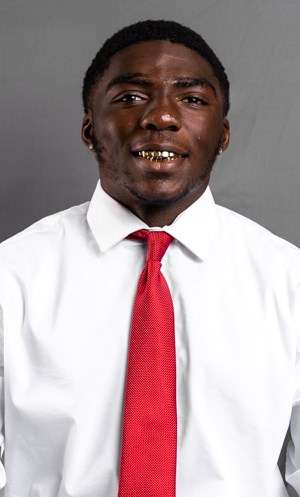 Dwayne McGee had a pair of rushing touchdowns for the Bears.
photo courtesy of Lenoir-Rhyne Athletics

No. 19 Lenoir-Rhyne outscored UVA Wise 21-0 in the third quarter and held UVA Wise scoreless in the second half to earn a commanding 42-10 win on Friday afternoon. The game was pushed up due to Hurricane Ian and is just the second documented LR football game on a Friday.

Dwayne McGee got the scoring started with a 1-yard plunge on the Bears opening drive to cap an 8-play, 75-yard possession that took 3:47 off the clock. At the end of the first quarter, Jordan Payne took a screen pass and turned it into a 62-yard touchdown reception to make it 14-0 LR.

UVA Wise got on the board with a 22-yard field goal to cap a 14-play drive which covered 69 yards but McGee answered with his second TD scamper, this one covering 16 yards. After a late turnover, UVA Wise would start their drive at the LR 33 yard line and scored on an 8-yard pass with 14 seconds left in the first half to make it 21-10 going into the break.

It was all LR in the second half as the Bears dominated the third quarter. After forcing a 3-and-out, Ryan Carter returned a punt 53 yards for a touchdown. It was the third all-time punt return for a TD for the Bears over UVA Wise as Kyle Dugger returned two for touchdowns in the 2019 matchup. Touchdowns by Jadus Davis and Will Martin were all the scoring LR would need as they took the 32-point win.

Sean White finished the game with 174 yards passing and a pair of touchdowns while connecting on 11 of his 17 pass attempts. McGee finished with 80 yards on 19 carries. In addition to his punt return for a TD, Carter added four grabs for 53 yards and Kelin Parsons had two catches for 32 yards.

LR intercepted three passes in the second half with Jon Ross Maye, Damien Savage and Percy King all earning takeaways. Maye led the Bears with seven tackles and 2.5 tackles for loss to go with his INT and a half-a-sack. UVa-Wise managed just 227 yards on 77 plays, an average of 2.9 yards per play. On the other side, LR averaged 6.2 yards per play.

LR is now 45-10 as a ranked team and 20-6 on the road as a ranked team. With the win, Mike Jacobs earned his 15th win at LR in his 20th career game. He becomes just the fifth coach in program history to get to 15 wins in 20 games, joining Drew Cronic, Ian Shields, Mike Houston and Hanley Painter.

The Bears improve to 4-1 overall, 3-0 in the South Atlantic Conference. LR will return to action on Saturday when they host Limestone at 1 p.m.