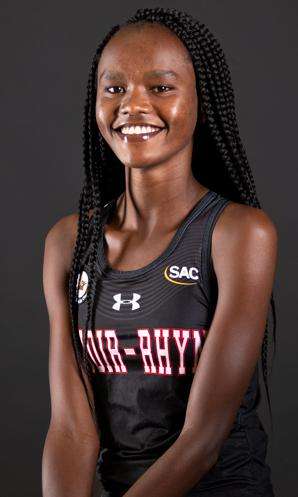 Janet Kwambai competed for the second straight season at the nationals.
photo courtesy of Lenoir-Rhyne Athletics

The Lenoir-Rhyne Women’s Cross Country team made the trip to Charlotte for the Royal Challenge, hosted by Queens University. The race was held at the McAlpine Creek Park in Charlotte, N.C.

The Women finished 9th out of 27 teams. The Bears finished 3rd out of the 4 SAC teams that raced this event. The Bears were ahead of Wingate, who finished 14th place but Anderson (5th) and Catawba (7th) finished ahead of the Bears.

On the individual side, Bears got a 8th place finished from Janet Kwambai, who finished with a 17:55 time. Kwambai time was almost identical to her time in the last race on September 23. Kwambai finished third at the Queen City that day with a time of 17:51.

The Lenoir-Rhyne Men’s Cross Country team finished 15th out of 24 teams at the Royal Challenge. This was the third event for the Bears this season and the first since September 23th. On the 23th, the Bears got a victory from Jacob Parkinson. Parkinson was the Bears leader on Friday as well as he finished 37th with a time of 25.34, very close to his 25.26 time from the last race.

Lewis Budgen was the second Bear to finish on Friday with a time of 25:56 good for 55th place. Budgen, a sophomore from Lincoln, United Kingdom has finished second for the Bears in back to back races. Noah Julian finished third for Lenoir-Rhyne with a time of 27:02 followed by Harrison Hickman. Eli Riggs was the fifth Bear to cross the finish line with a time of 27.48.

Both squads will next hit the trails at the Newberry Invitational on Saturday October 22nd.