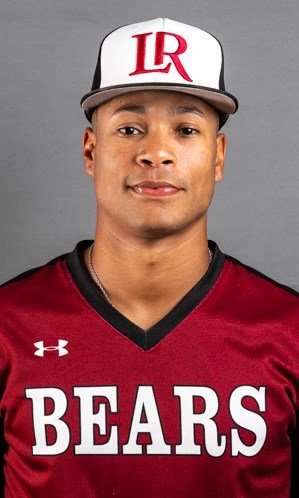 Luis Atiles was named tournament MVP for his eight-of-eighteen performance at the plate during the tournament with eight RBI.
photo courtesy of Lenoir-Rhyne Athletics

The Lenoir-Rhyne Baseball Team captured its first SAC Tournament title since 2001 with a convincing win over No. 1 Wingate in a winner-take-all championship game. The Bears battled back after dropping game one to erupt for 20 hits and erased a 6-1 deficit to score 17 of the final 19 runs of the game.

Lenoir-Rhyne lost the first game 8-3, giving L-R their first loss in the double elimination tournament. In the winner take all finale, the Bears blew out the Bulldogs, 18-8.

The South Atlantic Conference Tournament was held at Smokies Stadium in Kodak, Tenn., and was hosted by Carson-Newman.

GAME 1 RECAP
Wingate didn’t waste time in grabbing the upperhand, plating three runs in the bottom of the first inning. The big blow in the inning was a bases-loaded double from Seaver King with two outs to plate all three runners and give the Bulldogs an early lead.

The lead would extend in Wingate’s second at bat. McNeely singled through the right side to score one and Mitch Farris’ nubber would score another run. Ricky Clark singled to center to score the third run of the frame as Wingate took a 6-0 advantage and chased starter Joey Cobb.

The Bears would pull within 6-2 with a sacrifice fly from Luis Atiles in the 4th and an RBI groundout by Atiles in the sixth. The Bears had runners on second and third with one out in the sixth but Wingate got back-to-back strikeouts to end the threat.

Wingate would add insurance when King homered to dead center and pushed the lead to 8-2 with his fourth and fifth RBIs of the game.

GAME 2 RECAP
Wingate got on the board first for the second consecutive game by scoring a run on an LR error. The Bears would commit four errors in the first five innings leading to a handful of unearned runs.

The Bulldogs added two more runs in the third to push the lead to 3-0. Cole Laskowski put the Bears on the board with a solo bomb in the bottom of the third but Wingate made it 6-1 by scoring three runs on a throwing error to make it 6-1.

The Bears erupted for six runs in the fourth inning to claim their first lead of the game. The Bears scored twice on wild pitches in the frame and four different hitters drove in a run capped by a base hit from Drew Yniesta to give LR the 7-6 advantage.

Wingate tied it at seven in the sixth inning and took the lead on Seaver King’s fourth hit of the game and seventh RBI of the doubleheader. LR broke the game open with a 9-run sixth inning on seven hits. Eight straight batters reached base in the inning and Yniesta tied the game at eight with an RBI single.

Nick Clarno plated two with a double to make it 10-8 and Atiles added an RBI knock. Wade Cuda and David Bell added 2-RBI singles as the flood gates opened. Clarno ended the scoring with a bomb in the seventh inning.

Atiles was named SAC Tournament MVP after going 8-for-18 in the tournament with eight RBIs.

This was the highest scoring SAC Tournament Championship game in league history. The Bears captured just the third tournament title in program history.

Anthony Porrino extended his single-season RBI record by driving in one to give him 63 on the year. Yniesta moved within two runs of breaking the single-season runs record with 62.

The Bears will find out their tournament draw in the NCAA Selection Show in two weeks.

After clinching the series yesterday with a pair of wins, the App State softball team…

Jonathan Millner, a two-time All-American, and Cody Bond, another SoCon champion during his college career,…