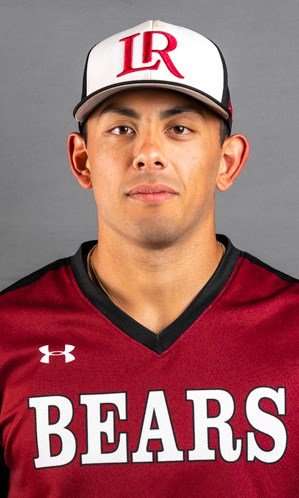 Drew Yniesta was one of two Bears named to the South Atlantic Conference First Team.
photo courtesy of Lenoir-Rhyne Athletics

In a Top-25 battle at Durham Field, it was No. 22 Lenoir-Rhyne that weathered the storm and knocked off No. 3 North Greenville 8-6 on Monday night. The Bears hit four home runs, Ben Friebel pitched six innings in relief, and Kanan Butler got a five-out save to preserve the win for the Bears, who improve to 38-8 on the year and add a huge win to their NCAA Tournament resume.

Joey Cobb got the start for the Bears, and it looked like things were going to get out of hand early. The first three Crusaders reached against him, but he got a pair of strikeouts and a flyout to get out of the jam unscathed, leaving the bases loaded.

Luis Atiles hit his second home run in three games in the bottom half of the inning, a three-run bomb with two outs to put the Bears ahead 3-0. The Crusaders came storming back in the top of the 2nd, hitting two home runs and scoring four runs to jump ahead 4-3.

The Bears tied the game in the bottom of the 2nd after Wade Cuda came home to score on a throwing error by NGU after an infield single by Drew Yniesta. LR went back-to-back in the 4th. First it was Yniesta taking a breaking ball out of the park for his 13th homer of the year to give the Bears the lead at 5-4, and then Nick Clarno followed him up with a line drive home run to make it 6-4.

Erick Ramirez drove in the first of two runs in the 5th on an RBI bunt single that scored David Bell to make it 7-4. Cory Bivins hit his second homer of the night for NGU in the 8th to cut the lead to 7-6, but then Ramirez countered with a solo blast of his own in the bottom of the inning to give the Bears some much-needed insurance.

Butler struck out all five batters he retired, including the final out with the go-ahead run at the plate. Friebel’s final line was 6.0 IP, 2 H, 2 R, 2 ER, 4 BB, 7 K. He earns his first win of the season in what was his longest outing of his collegiate career by far.

Butler picked up his first save of the year.

This was the first time the Bears beat a top-5 opponent since March of 2021 when they beat No. 3 Catawba. With 16 more strikeouts in the game, the Bears extend their single-season SAC record with 532 K’s.

LR avenges a 12-2 loss to North Greenville back on March 20 in Tigerville, S.C. The Bears have won three out of the last four matchups against the Crusaders. Lenoir-Rhyne continues to add to program record for most wins in a season with 38.

Coming into the game, North Greenville was 2nd in the nation in both hits and runs. LR held the Crusaders over five runs under their season average, and five hits for NGU was a season low.

Lenoir-Rhyne is 38-8 on the season. The Bears have a quick turnaround when they travel to Queens for a non-conference game Tuesday at 2 p.m. in Charlotte.