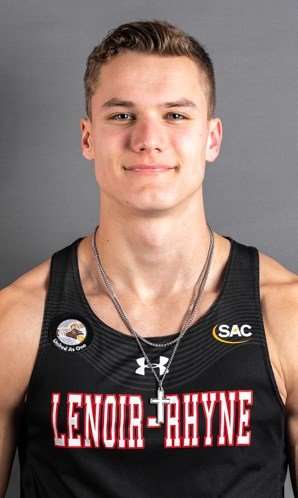 Jacob Wadsworth is a junior this season, majoring in elementary education and holds a 3.75 grade point average.
photo courtesy of Lenoir-Rhyne Athletics

The South Atlantic Conference Scholar-Athlete of the Year award is presented annually to one student-athlete in each of the Conference’s championship sports, and is voted on by the SAC’s Faculty Athletic Representatives Committee. The winners are selected based on their achievements in academics, athletics, service, and leadership.

Wadsworth, a junior from Dansville, N.Y., holds a 3.75 GPA while majoring in elementary education. A member of the Lenoir-Rhyne President’s and Dean’s Lists, Wadsworth is a Chi Alpha Sigma Honor Society member and was an Academic All-American prior to transferring to Lenoir-Rhyne.

“I am so proud of Jacob for this outstanding accomplishment,” said Lenoir-Rhyne head track & field coach Kevin Patterson. “I appreciate all the work he has put in both on and off the track. Congratulations on being named the Scholar-Athlete of the Year.”

A three-time All-American and two-time SAC Track & Field Champion, Wadsworth earned All-American honors in the heptathlon, long jump, and as a member of the 4×100 relay team in 2020-21. He also qualified for the NCAA National Championship in the heptathlon in 2021-22, and was part of the SAC Champion 4×400 relay team, while finishing as conference runner-up in the long jump.

Off the track, Wadsworth volunteers his time in and around the Lenoir-Rhyne and Hickory, N.C. communities. He has participated in Lenoir-Rhyne’s 828 Day, was a triathlon meet volunteer, and spends time helping the elderly in the community take care of their yards. He also serves as a volunteer track & field coach at Hickory Christian.