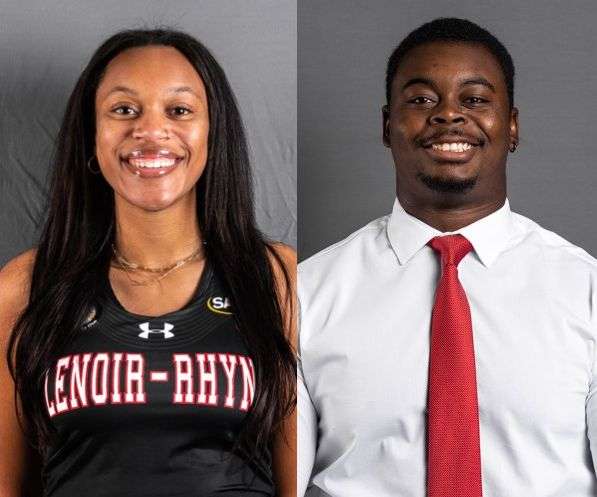 “We are thrilled McGriff Insurance is, once again, able to award minority postgraduate scholarships to our outstanding student-athletes and allow them to further their education,” said SAC Commissioner Patrick Britz. “The SAC continues to make a commitment to diversity, equity, and inclusion, and being able to honor and reward Kiara and Rashad for the hard work and dedication that they have put in academically and athletically is very exciting.”

“We are proud to be able to continue our support of these outstanding student-athletes as they further their education,” said Dan Nunnery, Senior Vice President of McGriff Insurance. “We are committed to supporting the SAC and all of its student-athletes.”

Moore, a senior from Morristown, Tenn., was a member of the Bears’ women’s basketball and track & field teams. She helped lead Lenoir-Rhyne to the 2022 SAC Women’s Outdoor Track & Field Championship, and scored 162 points with 186 rebounds, 37 assists, 28 blocks, and 25 steals in 52 career basketball games. She is a member of the Diversity, Equity, and Inclusion Council, is a Senior Bear of Distinction Ambassador, and she participated in the NCAA Student-Athlete Leadership Forum.

A three-time SAC Commissioner’s Honor Roll selection and Dean’s List honoree, Moore graduated with a 3.73 GPA in religious studies, while minoring in sociology. Upon completion of her undergraduate degree at Lenoir-Rhyne, Moore plans to attend graduate school at Lenoir-Rhyne with the goal of obtaining a Master of Arts in Leadership degree.

Yelding, a senior defensive tackle on the football team from Daphne, Ala., had 29 total tackles, including nine solo tackles and two tackles for loss during his career. He also had an interception and helped lead the Bears to the 2019 SAC Championship and the 2021 NCAA Division II Playoffs.

Moore was a Dean’s List and President’s List selection and a member of the Alpha Lambda Delta, Chi Sigma Alpha, and Pi Sigma Alpha Honor Societies. He was the vice president of the Lenoir-Rhyne Student-Athlete Advisory Committee, a resident assistant, and was a member of Bears Leadership Academy. Moore was a political science major with a focus on politics and law. He graduated with a 3.91 GPA, and upon graduation plans on attending graduate school at Lenoir-Rhyne where he will pursue a Master of Business Administration.

The McGriff Insurance Services Minority Postgraduate Scholarships are awarded to SAC minority student-athletes who excel academically and athletically and have completed their final year of intercollegiate athletics competition. Both Moore and Yelding will receive a one-time, non-renewable scholarship of $2,000 toward the graduate school of their choice.

CVCC Bass Fishing Competed This Past Weekend in Mississippi