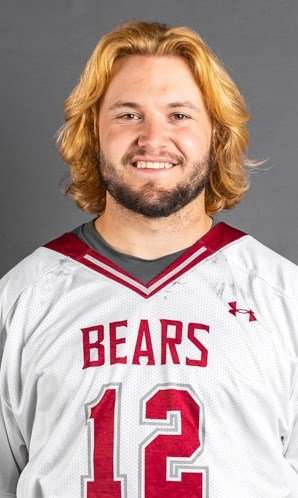 Moffat, a graduate student attacker from Airdrie, Alberta, Canada has a bachelor’s in Management and Marketing and recently earned his MBA with a 4.0 GPA. He has appeared on the University’s President’s List three times for having a 3.9 GPA or higher. Moffat is a Chi Alpha Sigma National College Honor Society member, which honors college athletes who have excelled in the classroom and in competition. He was awarded the 2021 Wayne B. Powell Award, which is given to one Lenoir-Rhyne male athlete who embodies excellence in the classroom, and on the field, and is a true leader on campus. Moffat was named the SAC Men’s Lacrosse Scholar-Athlete of the Year three times in a row.

During his first year with the Bears, he was named the South Atlantic Conference Freshman of the Year as well as an All-SAC Honorable Mention honoree. In his sophomore season, he was named a Third Team All-American and Second Team All-Decade member voted on by Lenoir-Rhyne Coaches for individuals who have performed on the field over the past ten years. He was voted the Comeback Athlete of the Year after an injured season. In his junior season, he was named a First Team All-SAC Attacker and helped lead the Bears to their victory over Wingate in the 2021 SAC Men’s Lacrosse Championship. His Redshirt senior year was one for the books as he once again was named to All-SAC second team and took home the 2022 SAC Championship title in a thrilling win over Limestone. He helped lead the Bears to an NCAA appearance where they took on Tampa in the National Quarterfinal game.

Moffat was involved in many service and leadership opportunities starting with many years of volunteer work at the Catawba County Humane Society caring for dogs and cats, while also cleaning cages, walking dogs and caring for cats. He has been part of the Bears Leadership Academy, a program that develops and educates student-athletes on becoming great leaders on the field and in life. Moffat was involved in Lenoir-Rhyne’s “828 Day,” which included signing autographs and playing games and activities with young kids. He has collected donations for a Soup Kitchen in Hickory and participated in Hickory’s Christmas parade to support local community members.