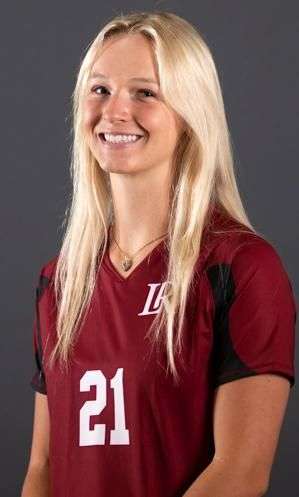 Bailey Carpenter had 11 digs defensively for the Bears.
photo courtesy of Lenoir-Rhyne Athletics

The Lenoir-Rhyne Women’s Volleyball concluded their two-game weekend trip in Tennessee on Saturday afternoon at Lincoln Memorial. The Bears fell 3-0 on the afternoon to the Railsplitters. Collete Romp lead the Bears with seven kills and Bailey Carpenter had 11 digs for the Bears as Lenoir-Rhyne will look to rebound and snap their two game losing streak when they travel to Limestone next Friday.

After an early 5-3 start in the first set, the Railsplitters went on a 11-2 run to help cruise to an easy first set victory. LR tried to rebound in the second set and did have a 12-8 lead before LMU won five straight points to take the lead 13-12. After the Bears briefly tied it at 13, LMU scored four straight points twice and eventually won 25-21. Lincoln Memorial than closed out the third set with a 7-2 run to complete the sweep on the afternoon.

Romp lead the Bears will seven kills as Ashley Hawkins added five. No one hit over .250 on the afternoon as the Bears hit .093 as a team. Jenna Marr had four block assists during the three sets. Carpenter’s 11 digs has her at 281 digs for the year.

The loss snaps a two-game winning streak against Lincoln Memorial. The loss drops the Bears to 8-4 in the SAC and in third place in the Piedmont division. It is the first time the Bears have lost three straight match this year.

The Bears are 12-7 overall, 8-4 in the South Atlantic Conference. LR will travel to Limestone on Friday.