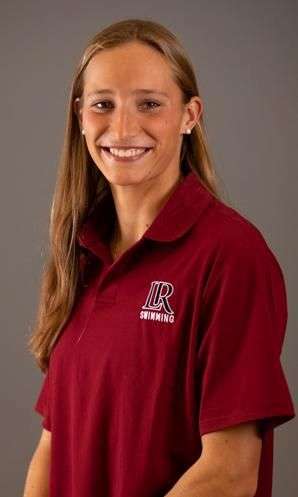 Lisa Boernigen opened the season with four wins for the Bears.
photo courtesy of Lenoir-Rhyne Athletics

The Bears started their season with a victory in the 200 Free Relay. Elizabeth Bowman, Boernigen, Kayana Taylor and Ella Penny took him the top spot with a 1:40.50 time. That group was not done as they teamed up later in the afternoon to win the 200 Medlay Realy with a time of 1:55.76.

LR won the seven team event with a score of 814.50 well ahead of second place William Peace, who finished with 237.50 points.

Meanwhile, the Lenoir-Rhyne Men’s Swimming Team won eight of nine events to open their season with a win at the Guilford College Invite. Micah McRea won four individual events and was part of the 200 Free Relay victory in the pool.

McRea started his night winning the 100 Fly with a 52.96 time then the senior took home the 100 Breast before winning the 50 Free and 200 Free events. McRea was also part of the 200 Free Relay joining Nathan McCormick,
Renato Herran and Matthew Stein. The team won the event with a 1:38.85 time. Herran also won the 100 Free (48.21) and McCormick won the 100 Back (54.41) as well as the Bears finished with 711 points to take him the team victory. William Peace finished second with 444 points.

Earlier in the evening, the Bears started the event with a victory in the 200 Free Relay as Stein joined Cordin Schrum, Christopher Glebus, and Cooper Sledge to finish with a 1:31.26 time.

Both squads Bears will now gear up for their home opener on Friday October 14th against Mars Hill.