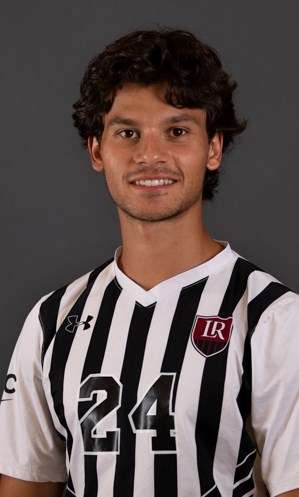 Carles Montoliu Lobo had a goal and an assist in the Bears upset win.
photo courtesy of Lenoir-Rhyne Athletics

The Lenoir-Rhyne Men’s Soccer Team opened their 2022 season with an upset win over No. 11 Young Harris. The Bears used three second half goals to cruise to a 3-1 win over the Mountain Lions. Carlos Moutoliu Lobo scored a goal and added an assist while Jaime Poza and Adrian Martina also scored their first goals of the season.

The first half was a defensive battle with a scoreless game heading into intermission. LR used its halftime adjustments wisely as they jumped on the board less than a minute into the second half when Montoliu Lobo made a long pass to Adrian Martina, who beat the keeper one on one to give the Bears the 1-0 lead.

After a foul resulted in a penalty kick, Jaime Poza gave the Bears a 2-0 lead in the 71st minute. The goal ended up being the game-winning goal. Montoliu Lobo ended the scoring with his first goal of the season when he beat the keeper from the top of the box after a pass from Luis Hernandez. Montoliu Lobo’s goal was his 5th career goal for the graduate senior.

Young Harris did get on the scoreboard with a penalty kick goal of their own in the 85th minute from Pato Padilla. The game saw 14 yellow cards and one red card during the contest, 14 of the cards were in the second half.

Juan Basabe got the win allowing one goal while making one save. The Bears’ defense held Young Harris to just six shots on the night.

This is the Bears’ second win all-time against Young Harris (2-3). The first win was on Sept 25, 2019, when the Bears gave No. 2 Young Harris their first regular loss in 708 days with a 1-0 win. That win against the Mountain Lions in 2019 is still the biggest upset in program history as Young Harris was the No. 2 team in the nation heading into that night.

August 25th is the earliest the Bears have opened a season since the 2006 season when the Bears beat Belmont Abbey 5-1 on August 24th, 2006.

LR was 2-2 last year against ranked opponents. Young Harris came into tonight’s game No. 11 in the preseason polls.

The Bears will travel to Fort Lauderdale, Florida to face Nova Southeastern on September 1 at 6pm.