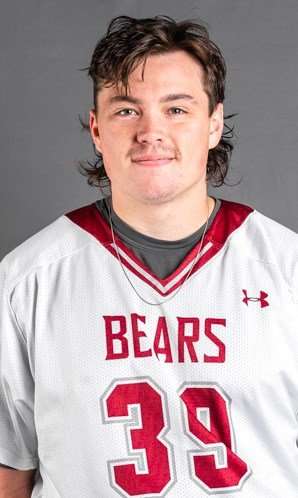 Colby Lensing had three goals and two assists for the Bears.
photo courtesy of Lenoir-Rhyne Athletics

For the fifth time in the past six seasons (not counting the COVID-shortened 2020 season where no championship was awarded) the Lenoir-Rhyne men’s lacrosse team earned a South Atlantic Regular Season Title after blasting Mars Hill, 26-4. The Bears, who won in 2016, 2017, 2018 and 2021 earned a share of this years title with Limestone. In total, the Bears have their sixth SAC Regular Season title, also capturing the 2014 crown.

The Bears started the game with a 6-0 scoring spurt with six different goal scorers. In that stretch, Myles Moffat scored one and handed out a pair of assists. After Mars Hill scored back-to-back goals to pull within 6-2, the Bears erupted with 13 straight goals.

Toron Eccleston got the scoring parade started to make it 7-2 with 13:37 left in the first half and Koby Hatcher ended the scoring run with 7:05 left in the third quarter.

It was the second consecutive game LR had a double-digit scoring run. The Bears went on an 18-0 spurt against Lincoln Memorial last Saturday.

The Bears would finish with six goals in the first quarter, five in the second, nine in the third and six in the fourth. Mars Hill only had more than one goal in a quarter in the first when they scored two.

Jaden Goldstein and Colby Lensing each netted their first career hat tricks in the victory. Kyle Hatcher had a career-high five points on two goals and three assists.

Moffat and Evan Voss finished with two goals and two helpers and Toron Eccleston had two goals and one assist. Jack Dickinson and Kolson Huff each had a pair of goals as well.

Macon Sumner and John Paulus combined to go 21 of 33 on the face off and each had four ground balls.

The Bears narrowly missed tying the record for most goals in a game which stands at 27 set last year against these Lions. This game was almost exactly a year since the Bears hung 27 on Mars Hill in Hickory on April 17, 2021.

LR will earn the No. 2 seed in the SAC Tournament as Limestone has the tiebreaker with the head-to-head victory over LR. The Bears have held each of their past four opponents to single digits in the scoring column. In total, LR has only allowed 16 goals in the past four games.
The Bears improve to 36-12 all-time in the month of April.

This is LR’s 29th straight win over an unranked opponent.

The Bears are 12-3 overall, 9-1 in the South Atlantic Conference. LR will return to action on Friday night as they host the SAC Tournament Semifinal at 7 p.m. The Bears will play the winner of Wingate and Catawba.