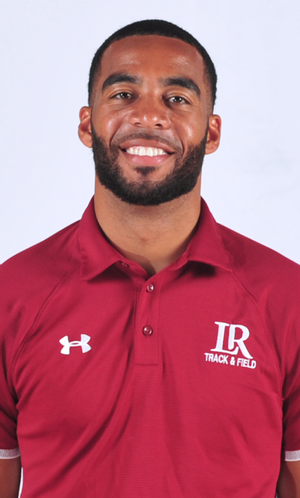 Lenoir-Rhyne Track and Field has announced the promotion of Seandell Davis to Associate Head Coach. Davis has been with the LR program since June of 2019, and has seen his athletes reach new heights with the Bears.

“Coach Davis has been with me since day one here at Lenoir-Rhyne University, and we could not have accomplished the things we have without his passion for LR,” said head coach Kevin Paterson. “He has the ability to bring out the best in his student-athletes, and that passion has helped take our program to new heights. Coach Davis is a rising star in the track and field coaching ranks, and I’m excited about his continued success here at LR.”

“I am excited for the opportunity to help lead this team in this new role,” Davis said. “Thank you to Kevin Paterson for taking a chance on me & Kim Pate for putting her trust in me. This track & field program has accomplished some tremendous things over the past 4 years and I am honored to be able to help lead such a great group of student-athletes, the best is yet to come!”

Davis has helped oversee the most successful period in LR Track and Field history since 2019. In that time frame, as a team, the Bears have won a SAC Championship, finished runner-up in the SAC twice, have finished in the top three in the SAC five times.

The Bears have just begun Indoor Season for the 2022-23 school year, and will be back in action in January.