An abandoned house that authorities say was known for drug activity at 1718 Power Line Road in Lincolnton has been torn down. Following complaints from the community about illegal drug activity, Lincoln County Sheriff Bill Beam began an investigation into the ownership of the abandoned property that police say had been taken over by drug dealers and users. 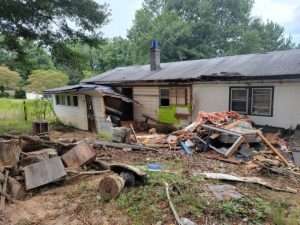 Narcotics investigators had conducted a number of investigations into drug activity and disturbances at the location. A search warrant was executed at the Power Line Road residence in February of 2021 that resulted in the seizure of 175 grams of methamphetamine, a firearm and the arrest of a drug dealer. 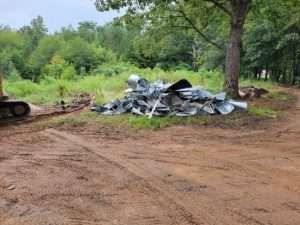 With the assistance of County Manager Kelly Atkins and the Lincoln County Commissioners, officials worked together to get the property deeded over to Lincoln County. On Wednesday (September 22) the abandoned house was torn down and the property cleared.

Lincolnton Man Arrested in Connection to Theft of Motorcycle