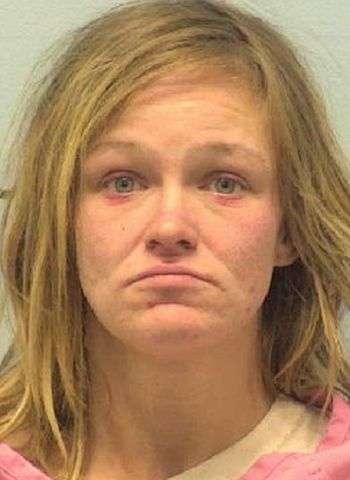 Wednesday at approximately 8 a.m. a Public Safety Officer was flagged down by a woman in the parking lot of the Wash House on West Fleming Drive in Morganton. During the officer’s investigation, they discovered that the woman, Meghann Meckenzie Bollinger who flagged them down had an active warrant for arrest. Bollinger was taken into custody and transported to the magistrate’s office.

While en-route to the magistrate the officer heard the click of handcuffs. When the officer checked the prisoner area of the patrol car, they discovered that the suspect had slipped her wrist out of the handcuffs. The officer pulled over at the North Carolina School For The Deaf and secured the suspect.

According to the North Carolina Department of Public Safety website, Bollinger has a criminal history that includes felony convictions in Jackson County for multiple counts of breaking & entering along with a count of larceny of a firearm. Her convictions date back to 2009 with the most recent being in 2019.

Bollinger was incarcerated in the Burke County Jail under $3,000 secured bond. She remained in jail as of earlier today (September 29). A District Court appearance was scheduled today in Morganton.