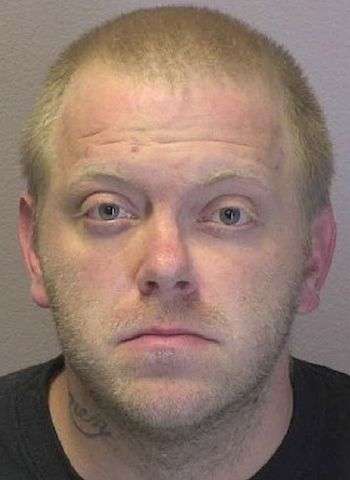 31-year-old Gary Benjamin Stamper of Highway 70 East in Hildebran was arrested by Hickory Police at about 9:30 last Friday morning (October 22) for felony larceny from a merchant by exiting the store through an emergency exit door. He was also served with two outstanding misdemeanor warrants issued in Burke County. The warrants were for resisting a public officer and impeding traffic by willfully sitting, standing, or lying on a highway or street. The Department of Probation & Parole also charged Stamper with a felony probation violation. Stamper is on probation as he serves a 48-month suspended sentence following a conviction on October 6 of this year in Catawba County on felony counts of breaking & entering and larceny after breaking & entering.

The suspect was taken into custody without incident at the Office of Adult Probation & Parole on 26th Street S.E. in Hickory. He was jailed in the Catawba County Detention Facility under a $6,000 secured bond. Stamper remained in jail as of this afternoon (October 26). An appearance in District Court was scheduled yesterday in Newton with another District Court date set for November 29 in Morganton. He has several additional court dates coming up in Catawba and Burke counties for larceny, possession of stolen goods, breaking & entering, possession of a schedule II controlled substance, obtaining property by false pretenses, breaking & entering a motor vehicle, and larceny of a motor vehicle.