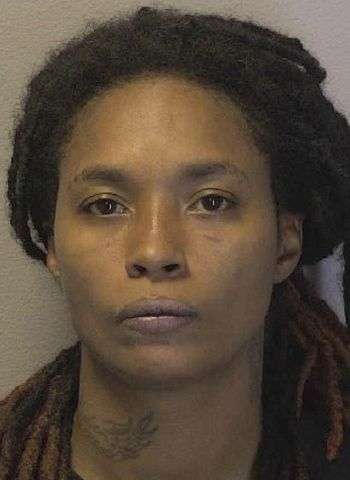 32-year-old Whitney Jana’e Gatewood of 14th Avenue N.W. in Hickory was arrested by Hickory Police shortly before 5 p.m. yesterday (October 22). She was charged with possession of firearm by a felon, reckless driving to endanger, fleeing to elude arrest with a motor vehicle, resisting a public officer, assault on a government official or employee, breaking & entering with intent terrorize or injure, assault by pointing a gun, carrying a concealed gun, assault with a deadly weapon, and an open container violation.

The charges stem from two incidents. On October 20, Officers responded to an assault call at the Argyle Place Apartment complex on 16th Street N.E. in Hickory. The victim reported that Gatewood entered the residence and assaulted her. Warrants for Gatewood’s arrest were issued.

Yesterday, Hickory Police responded to an assault in progress at a residence on 10th Avenue S.E. The report involved a subject with a gun. Officers attempted to stop the suspect vehicle as the driver left the scene. The vehicle did not stop. Officers pursued the vehicle with the chase ending when the vehicle crashed into a power pole at the intersection of 3rd Avenue S.E. and Highway 127. Gatewood was arrested after she exited the vehicle and attempted to flee on foot.

Gatewood was placed in the Catawba Co. Detention Facility with bond set at $25,000, secured. A first appearance in District Court was scheduled today in Newton.

Authorities Seeking Motorcyclist Involved In Pursuit That Resulted In Wreck

Thursday (September 10), at 7:59 p.m., while Burke County detectives were traveling east on Interstate…

Today is September 11, it's been 19 years since the terrorist attacks on New York…